The previous parts in this series:
http://aliendjinnromances.blogspot.com/2014/04/index-to-theme-worldbuilding.html

On Facebook, a writer commented on the experience of teaching story  Analysis to children, and I responded with a comment about how much harder it is to teach Synthesis.

The writer then asked, " Do you analyze first or tell your story and then analyze and synthesize?"

I responded with a long post about Kabbalah, and the value of that point of view to Science Fiction writers.

Synthesis is what I've been hobby-horsing on in the various series of Writing Craft Posts on this blog.

I've been presenting bits and pieces (teased out of Headlines and other parts of "reality") for you to synthesize into new stories.

I analyze reality and hand you stripped out bits to synthesize.  Most of those bits are "theme" material.

Synthesis is what writers do.  It is what artists in general do.

Rearranging the pieces of reality that the audience sees around them into something that unlocks vistas of new possibilities is what artists do that is of value.  Readers call those novels Inspiring or Refreshing or Riveting.  It's what we get paid for -- jarring thinking loose to roam free-range.

Worldbuilding is about analyzing our real world into bits and pieces, then synthesizing, putting them back together into a new pattern, building a new world from the same components we already have, and maybe one or two really alien ones.

Theme is about the organizing principle that arranged those bits and pieces to begin with combined or synthesized into the new principle you invent to build your fictional world around.

What makes fiction believable and the source of value to your customers is the internal consistency of the rules for your built world.

You need to find the Rule that keeps our actual real-world "consistent," for your target readership, understand how the existence of consistency is relied upon by your reader/viewer in daily life.  Then you can build a consistent world to display your story that uses a Modified Rule around which it is organized, but a Rule that the Characters can rely on the same way your customer relies on the consistency of everyday reality.

All of this analysis and synthesis is first done consciously, then forgotten about.  That sinks it all into your unconscious.  Years later, sometimes decades later, you have "An Idea" for a story -- and it just comes pouring out.  Meanwhile, you study and practice writing craft exercises, learning to frame a scene, concoct characters, split their roles in two to create conflict, resolve conflicts, etc etc.  All the skills we've been discussing, practiced to the point where you just don't ever think about it while doing it.

So in essence, the answer to this writer's question about how I do it, is "neither" or perhaps "both/and."

This writer's question is actually a question about Kabbalah.

I answered this question in a long-winded, oblique way, in the 5 Tarot books now up on Kindle.  The cheapest way to get all of them together is the combined volume. 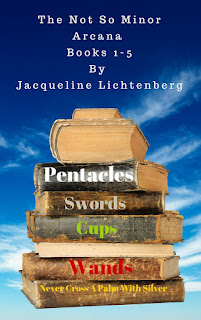 The 5 individual volumes are 99c each.  The combined volume is $3.25 or free on KindleUnlimited.

In short The Not So Minor Arcana is my diatribe against the Hellenistic way of looking at Life, which all our modern cultures are either founded upon or infused with.

Plato (it seems to me, partly because he lived at about the right time) seemed to be on a terror-induced campaign to disprove everything in the Torah, and his concepts seemed to me to be rooted in a deep, instinctual terror of the Reality described in Kabbalah.  Considering the politics at that time in History, it just seems impossible to me that he didn't know what was happening in Israel.

Given the Hellenistic Pantheon, which does reflect basic human nature, it is also plausible to me that he was desperate to disprove the existence of such gods (all bullies from dysfunctional families with nasty parental issues).

I learned about the Plato vs. Torah dichotomy in a couple of college courses years before Star Trek, but a decade after deciding to become a professional Science Fiction writer (about age 15).

I had honed an awareness of the place of CONFLICT in DRAMA and thus saw how useful the Plato/Aristotle et. al. vs Torah conflict could be in generating a new kind of Science Fiction -- which it seems I have been credited with doing.
http://www.thegalaxyexpress.net/2015/06/free-ebook-brief-history-of-science.html

...just by building into the cultural THEME element of the drama, a challenge to the unconscious assumptions we have all been "programmed" with as children - assumptions about the Nature of Reality -- assumptions which would be viewed as fallacious in a Torah based culture (even Israel today does not have such a culture.)

The interesting thing, to me, is that Gene Roddenberry (a Humanist) eventually allowed a bit of Torah based reality to be sketched into the edges of the Vulcan culture that Spock represented (the Mind Meld, the Katra).  I just did a 5k essay on the Katra and it is reposted here:

"ANALYSIS" and "SYNTHESIS" are Hellenistic (Ancient Greek Philosophy) concepts (see the Greek roots inside the words?), and very possibly utterly fallacious (as most of their ideas via Plato, Aristotle etc are. Pythagoras is particularly interesting in this regard.)

This Hellenistic description of reality works PERFECTLY (witness all of Science as We Know It) as long as you consider only "reality" (i.e. the bottom-most of the 44 Sepheroth of the structure of reality).  That's where we live and that's where all of physical science is absolutely valid.

That's why there is no conflict between "science" and "religion" if you consider "religion" to be the Torah.  Science describes and manipulates, perfectly, a "special case" within the totality of Creation -- that tiny 44th fraction of the whole.  You really don't need to know more than science reveals to live easily in material reality.

Many people never feel anything lacking.  Those who do, though, have a hard time reconciling Science with Torah -- because Aristotelian Logic demands Either/Or thinking, True/False thinking, and is the foundation of the Zero Sum Game (for you to win, someone else has to lose).  In Reality, two mutually exclusive things can not co-exist.

In that Hellenistic Reality -- the Soul Mate and Happily Ever After concepts are fallacious.

If you can wrap your head around the concept Infinite and the concept ECHAD (One), you have no trouble with mutually exclusive things co-existing.

But it's a long-long-long philosophical journey to get to that ECHAD based vision of reality.  You have to learn a totally new idea of what "exist" actually means -- which pretty much means learning Hebrew where the verb TO BE is used differently than in other languages.  That's what Kabbalah is all about.  ECHAD is the key.  EMET is probably the lock.

Aristotelian logic has divided our cultural mentality with impenetrable walls to prevent us seeing the world as ECHAD, and defying those walls can make you go crazy.  One of those walls is what gives rise to the concepts ANALYSIS vs SYNTHESIS as being opposites.

The go-crazy effect of trying to break out of Aristotelian conditioning is now being revealed in brain-studies showing how synapses develop, how the brain is plastic and changes under experiences.

Thus study of Kabbalah is not recommended for everyone.

Some people will hurl themselves at this problem of Science vs. God and slam themselves into a bloody pulp trying to choose to "believe" or to "think logically."

You can't have science and still believe in God, they assume.

That's a fallacy -- and it is the fallacy which you will find in Plato if you dig hard into his writings, and the surrounding culture that produced him, and read his stuff in terms of how crazy-scared he was of Torah and the effect a functioning (well, somewhat functional) Jewish Kingdom was having on his world.

What you learn from Kabbalah is a view of the universe that is not "either/or" that is not "zero-sum-game" that is not real/not-real, that is not "God/No-God" -- but rather "both and" -- somewhat like the Particle/Wave problem in physics.  People discard the Bible as ridiculous because they read it with either/or Aristotelian-conditioned eyes -- from that point of view, it is idiotic.

Look hard at this graphic: 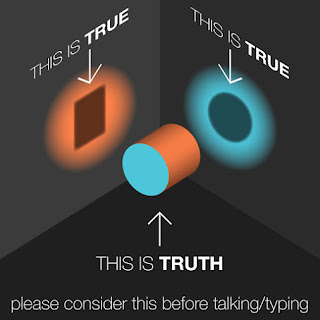 That's the classic Lover's Quarrel.  It really is the core essence of Science Fiction Romance where the "science" is the science of the brain and "seeing."

Consider the classic optical illusion of the two faces facing each other -- or maybe it's a vase?  Blink, and it changes.

That's what I'm talking about -- the exact SAME "reality" and two views that our brains interpret as DIFFERENT only because we can't break out of the Aristotelian Cultural Conditioning rooted in Plato's personal political neuroses.

I will probably discuss this graphic again and again in various contexts and various esoteric applications of the principle having to do with the metaphorical "light" by which we understand what we see as the difference between right and wrong, and what the Biblical penalty translated as "Cut Off" actually means in practice.

Remember the Bohr Atom model was Aristotelian.  Atom is a Hellenistic concept.  Science is now revealing some of the fallacious concepts behind that thinking, but the people doing the science are so steeped in Hellenistic thinking that they do not know Hellenistic Thinking even exists, (a fish doesn't know water exists) therefore they have no idea what they are discovering!

So REAL ALIENS (and yes, I saw the discovered planets news) will probably have conditioning of their own, and very likely neuroses or the equivalent built into their cultures.  Understand how neuroses propagate through millennial to affect our current culture, then create some Aliens.

The only way I can see that we can pull off a FIRST CONTACT without a war of extermination is to shed Plato's neuroses and Aristotle/Pythagoras's ideas of what constitutes reality.

The artificial and fallacious division of processes into Analysis and Synthesis (do stare at that graphic some more) may be one of those ideas we have to shed to be at Peace with ourselves -- and thus be able to make first contact without extermination.

Once the question is asked, "Is it fallacious?" then we come to "Well, if not Analysis and Synthesis then what do you use to think with?"  And there you will hit that wall built into your mind by early conditioning.

Your challenge as a science fiction romance book writer is to postulate answers Aliens might be clinging to as firmly as we cling to Plato-Aristotle et. al.

If you find you have no ideas, nibble at those books explaining Tarot in terms of Kabbalah, and you will very likely come away overflowing with ideas, compelled to write, just to contradict what they say.  Contradicting is good!