Today we have a guest blog by urban fantasy author Kelly A. Harmon.

Kelly used to write truthful, honest stories about authors and thespians, senators and statesmen, movie stars and murderers. Now she writes lies, which is infinitely more satisfying, but lacks the convenience of doorstep delivery.

She is an award-winning journalist and author, and a member of the Science Fiction & Fantasy Writers of America. A Baltimore native, she writes the Charm City Darkness series, which includes the novels Stoned in Charm City, A Favor for a Fiend, and the soon to be published A Blue Collar Proposition. Her science fiction and fantasy stories can be found in Triangulation: Dark Glass, Hellebore and Rue, and Deep Cuts: Mayhem, Menace and Misery.

She recently co-edited a fantasy, horror, and SF anthology, Hides the Dark Tower. 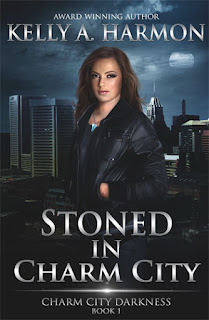 I was just on a SFWA panel at the Baltimore Book Festival where the topic was, “Location, Location, Location!” We talked about the importance of the setting of the story, and what it adds—or takes away—from what’s happening in the tale.

What is setting? It’s the stage on which your characters act out the events of the story. It’s almost another character, and should be as compelling as any one of the characters in your tale. Your setting should be distinct.

For example, let’s say you’re writing a story that takes place on the beach. You could describe the white sand, too hot to stand on at noon on a summer’s day, and the waves rolling in to the shore. There’s the cry of a seabird, and the rush of cool wind in your face, blowing in off the ocean.

It’s full of detail, right? A perfect setting? No—these are just false details. Why false? Because they could describe any generic beach.

Consider that Bermuda has pink sand beaches and Maui has black ones—formed from pulverized volcanic rock. Parts of Genoa, Italy, have narrow, pebbled beaches with no sand to speak of. As for seabirds, Maryland has the Surf Scoter, Maine has the Great Cormorant, and California has Snowy Plovers (granted, that birds are migratory and many species frequent large areas). The beach could be rocky and steep or wide and flat with stunted, scrub pine trying to survive on its shores, or tall, willowy palm trees reaching for the sun.

See what I’m getting at here? It’s all about specifics.

But setting is tricky: give too many details—or false ones—and the setting won’t ring true to your reader—particularly to readers who might know the area.

For example: we were in Baltimore, so the panel moderator brought up Laura Lippman’s Tess Monaghan thrillers, which are set in Baltimore. Lippman has a wonderful gift for scene setting, but I can’t read her books, because her Baltimore isn’t my Baltimore. I can’t get lost in her story because the setting details keep leaping out at me.

In one of her books, Tess considers stopping at Bertha’s restaurant to “squinch up her nose at tourists eating mussels.” I write about Bertha’s, too, in my books, but tourists are part of what makes the food great: sharing it with visitors. Lippman’s books are what I’d call uptown— with descriptions of City Hall and the Maryland Governor—while mine are more blue collar, with a main character who sometimes has to choose if she’d rather ride the bus home or eat dinner, since she doesn’t have enough funds for both. All the specifics are different. (But Baltimore has more than 250 distinct neighborhoods, so I like to think that both Lippman and I are right.)

So what elements define a well-crafted setting?

1) The Main Location of the story: it could be a neighborhood of a city, like Canton or Highlandtown in Baltimore. Or, it could be a specific place in the community, like Bertha’s Restaurant or Saint Agnes Hospital. The story could be set on a boat in the ocean, or any fictional world.

2) The larger area: what surrounds your central location? The wider region of Baltimore City or Baltimore County. The crops and meadows surrounding a mythic castle. The forest surrounding a cabin. Descriptions of these set some of the tone in the story: the city could be celebrating (Mardi Gras), the crops could be withering on the vine, the meadows bleak; the forest could be haunted. Local landmarks make an impact as well: the Baltimore Shot Tower, Fort McHenry, the Empire State Building. Their depiction—along with homegrown legend and lore—“flavor” the setting.

3) Occupations, hobbies and local customs are also going to help set the scene. Is your main character (or others) a city councilman, a cop, a welder, or a college student? Does he or she collect stamps, surf, or birdwatch? If your write about Baltimore, one or more of your characters probably relishes steamed blue crabs with McCormick’s Old Bay seasoning. (While down south, crabs are boiled.) In Chicago, pizza is deep dish, while New York boasts hand-tossed and thin—and in either place you can grab a slice for lunch. Ever ordered pizza in Italy? You get the entire pie to yourself. These details add dimension to both the setting and your characters.

Together, these three things create a rich, multi-layered backdrop for your story.

Here’s a Systematic Way to Build A Setting:

I start thinking about my setting long before I write the story. I decide on the main location, and write that at the top of my “setting” page. I do some research, and then begin creating lists: The first contains details about the main setting: sights, smells, sounds that touch on the five senses. The second list includes similar details about the larger area and folklore. The third, of course, is all about occupations, hobbies and local customs.

Mind mapping techniques are good for this, too. If you’re more visual, consider creating a collage of pictures cut from magazines or printed from the internet. If I’m writing about a real location, I’ll supplement my lists with photos and maps.

The document isn’t done when you’ve finished brainstorming. Keep it handy while you’re writing or researching so that you can add to it as you learn new items.

So now you’ve got this huge setting document. How do you use it? Pick a few salient details to begin writing your story: choose the ones which set the tone or mood you want to portray. For example, if your story is a murder mystery which takes place in a hospital, it might be best to mention the basement morgue instead of the lobby reception area—even if the detective has to travel through it to get where he needs to be.

When you’re stuck for a detail, give your settings document a glance. Pick one or two and continue on. Each time you use a detail, cross a line through it and jot down a note where you used it: the third scene, chapter one, the prologue, etc. This insures you don’t accidentally mention the same detail over and over and bore your reader. It also gives you a record of where you mentioned something so that you don’t do so again too soon.

A caveat: When you’re writing, don’t lump all your descriptions together in large, expository paragraphs. Instead, sprinkle them around like salt: a bit of it makes the flavor of the meal stand out; too much ruins the dish. 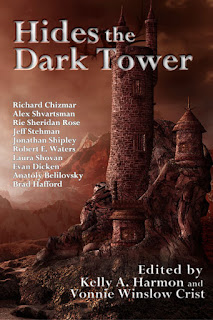 Finally, don’t feel that you’ve got to use everything on your list. You run the risk of the background creeping into the foreground of the story—taking away from the story itself.

Posted by Margaret Carter at 8:00 AM