In Part 3 of this series we began looking at Making A Living as a writer.  The discussion of how to achieve that continues here in Part 5.  Part 6, next week, will bring these ideas together.

Here are the previous parts of Marketing Fiction In A Changing World:

Part 4: Understanding The Headlines You Use For Springboards:
http://aliendjinnromances.blogspot.com/2014/02/marketing-fiction-in-changing-world_18.html

Long ago, in the mid-20th Century, Science Fiction was just getting a start.

That interval concluded around 1947 - a couple of years after the official end, troops had mustered out, reclaimed or acquired spouses, found jobs, started families, -- and in England, were still in the process of rebuilding buildings.

By the mid-1950's the rebuild had primed the pump of world economies and we were roaring along in publishing.

During that era, many science fiction magazines thrived, and niche imprints were created for books.

It was the biggest publishing genre innovation since maybe The Dime Novel which brought the Western genre to the densely populated East Coast -- ignited dreams and send droves of people to colonize the USA mid-West.

The Ace Doubles ignited a furor of book-buying of science fiction.

Now these "books" were really composed of 2 novella length works -- longer than magazine stories, but shorter than Novels.

Ace put 2 of these long-stories back to back, but upside down with respect to each other.  Each side of the volume was a "front cover" with illustration.

They packaged a well known writer on one side, and a beginner or unknown on the flip side.

Many great writers got their start this way.

But at the same time, by using this format, ACE was able to import works from England, introducing popular English Science Fiction to the US audience.

Marion Zimmer Bradley's SWORD OF ALDONES (her first novel; she had sold short work to a magazine prior to that) was an ACE Double.

It was a marketing ploy, and it worked fabulously well by making longer works cheap and accessible, and exploration of new authors painless.

E. C. Tubb was one of the British imports.

I've recently picked up the audible.com version of the first three novels in Tubb's DUMAREST OF TERRA series, remembering it and finding it still stands up.

Here is a glimpse of the ACE marketing and decades later, the audible.com marketing via Wildside Press.  Study this.

If you're just starting out as a writer, this is what you aim to accomplish -- longevity.  Tubb's heirs are benefiting from this series which ran over 20 books.

Now, I have to tell you about DERAI, the second in the Dumarest saga. 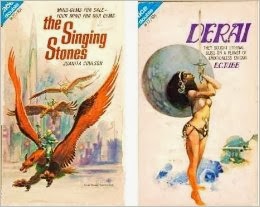 Dumarest is a man from Earth, traveling the galaxy (much populated by various human cultures).  He has gotten so far from Earth that nobody's ever heard of it except as the legendary (how ridiculous!) birthplace of humankind.

Now look at this non-fiction book from Wildside Press (available for reading on google) is an excellent history of science fiction, and the influential writers of so long ago.

You should find this book at the top of the list and it will display a comment on Tubb's work in the mid-1950's.

I have this vague memory of my first encounter with Dumarest.  I used to haunt the used book stores and buy British magazines (tattered and yellowed with age) and other very hard-used paperbacks, reading Science Fiction from the 1930's and 1940's while waiting for the next new book.

Today, there's no way any one person can read everything the big publishers are churning out in Science Fiction Romance, Fantasy and PNR.  That has not always been the case!

So in my mind, E. C. Tubb and Dumarest and this style of storytelling he uses seems to me to have been one of those used magazines from the 1950's -- it was old when I got it, and is long since gone.  So I can't check this.

Everything online, and the serious scholars who have searched hard, are saying the Dumarest material dates from the mid-1970's Ace Doubles -- see the covers above.

I could be confusing two different Tubb works.

Tubb dominated the British SF magazines in the mid-1950's and it could be some of that material that grabbed me.

In the mid-1970's, the copyright laws were changed, so many earlier works were re-copyrighted so heirs could benefit from re-sale.  Nobody knew then what e-books would do to the reprint market -- or what the advent of Science Fiction Romance would do.  But right now, those older works are re-appearing, and they reveal the origins of SFR, PNR, etc.

It claims that Tubb wrote in a melodramatic vein.

That word, used in reference to science fiction, is a perjorative.

It was used to disparage some of my favorite works -- the Lensman Series by E. E. Smith, Ph.D. -- along with the term "Space Opera."

These are terms which simply scorn anyone who respects these works.

But the fact is these works were and still are, deep, far-ranging philosophically challenging explorations.  They could even be seen as "subversive" -- even today!

The second Dumarest novel, DERAI, is a Romance.

It is a standard modern-day ROMANCE!  (except for the ending, plus the idea that the man who marries the heiress gets control of her fortune).  It even has a Heroic-Heroine Telepath who falls in love with the Hunk Hero non-telepath assigned as her bodyguard.

The ending, by requisite marketing formula, requires the heroine to die, leaving Dumarest single, free, available, and able and willing to travel to the next planet in search of Earth.

That's what the series is about - Dumarest's quests to find his way back to Earth, and all the adventures he has getting there.

But using a science fiction twist, Tubb leaves her alive and even happy!

Meanwhile, she has informed Dumarest of who knows where Earth is.  And he is now in hot pursuit of that information, knowing the galaxy-spanning organization is his mortal enemy.

So the Dumarest saga is about how one man confronts seemingly overwhelming odds to go home to Earth.

The other thing I noted about E. C. Tubb's writing which didn't distinguish the work against the background of contemporary works, but causes it to stand out against today's novels -- vocabulary.  The choice of word is excellent, precise, jewel-like (very much as you find in Chelsea Quinn Yarbro's St. Germain Vampire novels).

Tubb doesn't reach for those OED gems, though -- he uses normal, everyday vocabulary, but uses it well.

So I recommend the Dumarest saga as a way to study how to achieve inconspicuous but elloquent precision in vocabulary usage.

Just like a TV Series Hero, Dumarest has to stay footloose.  But his character is such that he does form relationships, and his personal integrity requires him to risk even his life for the sake of those relationships.

He demonstrates Self Respect -- something you don't find a lot of on TV Series these days.  When you do find it on TV, it's watered down compared to this.

Which brings me to an article published last year, the 13 attributes of successful people.

If you are building a character to be the center-pole of a long series, a quintessential Hero, use this list and test every line of dialogue and every decision that character makes against this list.

Check Dumarest against that list.  See what markets on both sides of the Atlantic.

It's not the "dusty" or "old" part that you need to study -- or emulate.  (Please, no emulation of the dusty or old parts!).

To figure out what to do TODAY that will last and last and come back into print to put your grandchildren through college -- study the parts of these novels, the ingredients, that have lasted.

The parts that still work will very likely still work 50 years from now.

To figure out how to use that information to create a galaxy you can tell a long-romance-saga against, you do need to know something about what else was going on during the early 20th century.

What did life feel like?  Well, Hollywood isn't a reliable source of historical information, but it does show the Fantasies and Aspirations -- the wishes, dreams, spirit -- of that time.

Combine watching some really old films on Netflix with some non-fiction written at that time (not in modern times) about the world-forces shaping people's lives.  "Life" is mostly about wedging yourself a place between sweeping, storming forces.  We all try to find our place, our "Home" as Dumarest does, and make a safe place to raise children.

I should also note that board gamers look at the Dumarest of Terra Series as the origin of the extremely popular (Dungeons & Dragons level popular) TRAVELER game.

Study the Dumarest phenomenon (how popular it was -- it is in the same category as the Sten Series, also from Wildside) against those two dimensions, Hollywood dreams and cold-hard-facts of history, and you will understand what Ace Doubles were and what they did for science fiction.

That is what has to be done for the HEA plausibility in the Romance genre.  We have the leverage now.  We have but to use it.

There are 8 main novels and several additional newer volumes.  They are in paper, e-book, and audiobook.

Sten dates from the 1980's or so, and the series was written concurrently with a large number of screenplays (mostly TV) by Cole and Bunch.

Stack up STEN next to DUMAREST, and contrast-compare what innovation they brought to their decade's audience.

While you're at it, you might want to make a third column for the 8 original Sime~Gen volumes (there are now 12 volumes).

Look at the strong influences and criss-crossing thematic lines.  Look at the character-formulae relative to that list of 13 things successful people avoid.

Now look around at the current headlines.  Evaluate the current culture surrounding your target audience.  Check your Market.

Wildside Press is today reviving the Ace Double format.  Two of the new, first publication Sime~Gen novels are part of that program.

These two new novels are available in this paper Doubles format, and individually as e-book and audible.com editions.

Up until recently, Romance Genre was never considered "reprintable" -- today, Bestselling Romance writers are bringing their own backlist books out as e-books (yeah, Bestselling writers are self-publishing).  And these golden oldies are selling very well!

Yes, women who lack adherence to those 13 principles of successful people in that article seem implausible.

But yes, that's how life was -- and still is for a lot of women world-wide.

Consider that when you're rummaging around in your mind for a story that's marketable today and for the next 50 years.

Then ponder this article, and why it is that self-published writers don't make much money.

And in that article is this link:
http://www.digitalbookworld.com/2013/self-publishing-debate-part3/