Here is the index of previous posts relevant to this discussion:
http://aliendjinnromances.blogspot.com/2013/11/index-post-to-art-and-craft-of-story.html

All the books on how to write stories tell you (without showing) that to sell fiction, all you have to do is write an "interesting" story.

No instruction is more frustrating than that simple sentence "just write an interesting story."  So let's delve a little deeper than writing teachers usually do.

"What is interesting and how do you write it?"

And what has that to do with the Art of Episodic Plotting?

Note the first post in this series is from a selling writer who is intrigued by "art heists" -- and introduces the elements about art theft which is intriguing to her.
http://aliendjinnromances.blogspot.com/2012/01/story-springboards-part-1-art-heists-by.html

"Interesting" is a property of those structures much more than it is of a particular subject, but remember that THEME is the foundation of story structure, which is why we've been examining how to "integrate" theme into each of the other elements of structure.

For each type of structure, a different type of SPRINGBOARD is necessary.

The springboard (wound up potential energy that is about to hurl the reader into a ballistic arc with an "ending" of belly-flopping or slicing into the pool) is energized by the quality "interesting"  but "aimed" at a target which is identified as "genre."  The strength and flexibility of the springboard you construct depends on how well "integrated" theme is with the rest of the components of the story structure.

That is, you can sell any structure in any genre, mix and match, if you construct your springboard just right.

The springboard is the main subject discussed in your logline, pitch, or query letter, but it is never mentioned by name.  The springboard has to be shown, not told.

This is why the "logline" or pitch for a story, and the "query letter" and synopsis or summary or treatment, is such a useful tool to the editor who has to choose whether to invest the company's money in this project.

The "springboard" reveals which audience demographic will be "interested" by this story.

Showing not telling your springboard is also why it is so hard for a writer to create the selling pitch or query letter -- the inclination is to TELL the editor, not show.  But the editor is looking for a master of show-don't-tell.

The logline, query letter, etc reveal to the editor whether you, the writer, know what you're doing -- or not.

If an editor backs a writer who does not know what he/she is doing, the editor tends to get fired.  The alternative for the editor is to try to teach that writer the "ropes."  Time spent on teaching one writer is time that can't be spent perfecting other manuscripts.  So an editor who is "developing" one writer has to buy other products that are perfected already.

So now let's put "interesting" under the microscope.

A while ago, the following "interesting" tweet appeared in my twitterfeed.
--------------
Tweet from http://twitter.com/MadMachX
The happiest person is the person who thinks the most interesting thoughts.

This philosophy (yes it is a philosophy and therefore makes a terrific novel theme) is based on a "misnomer" that everyone believes from earliest childhood -- the labeling of an object (or in this case a thought) with an attribute which does not originate within that object.

Here's the URL to the post where the power of the "misnomer" is discussed in depth.  It reveals an essential component of the process of grabbing the "interest" of a target audience, the use of language.
http://aliendjinnromances.blogspot.com/2013/02/theme-worldbuilding-integration-part-6.html

The misnomer twist in that tweet above is the attribution of the property "interesting" to the object in which the person is interested.

The philosophy behind that attribution is very similar to the thinking behind the misnomer "Fast Food."  (the healthiness of the food is attributed to the method of delivery -- misdirecting the problem-solving attention away from the real problem.)

Remember a problem is a manifestation of a CONFLICT - and conflict is the essence of story as well as plot.

In constructing the foundation for a long series of novels, a TV Series, a movie-serial, or an episodic videogame, you have to load the problem(s) with enough potential energy to "spring" all the way to the ending of the Series.

I don't think there are any books on writing craft that reveal the internal mechanism of the writer's mind that must function (consciously for some, unconsciously for most) to produce a "springboard" with enough energy wound up in it to reach "the end" of a long arc (series of novels, or a TV Series) and still have enough punch to blow off energy in the biggest climax of the series.

In a TV Series, there is usually a team of writers brainstorming the final climax, which is often why a series will "peter out" or fall off track as writers come and go from the team.

Most writers who do formulate a powerful springboard, do it by accident, but there is a method to it that can be learned, even by those born without any writing Talent.

One thing "writers" come by naturally, that is a sure sign a child has the capacity to make a living at writing, is a curiosity about words for their own sake, an interest in words beyond the mere meaning.

Such a curiosity includes words in many languages, both cognate with the native language of the child and non-cognate languages -- AND "made up" languages like Klingon or Elvish.

So the child learns early that you can't translate anything from one language to another, not really.  You can approximate and create the illusion of understanding, but not the understanding itself.  That's why most all children create their own words for the feelings and concepts developing in their minds -- convinced no human has ever before needed such a word.

You can't really translate from that internal apprehension of a "meaning" to an external, mutually agreed upon meaning. 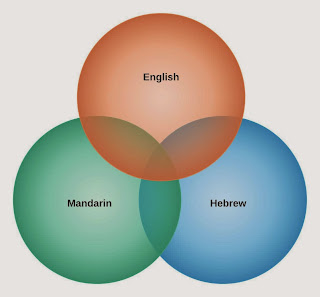 Look at all the circles as representing the same concept in different languages.

And consider that children and adolescents don't "speak the same language" as adults, or grandparents.  Language reflects the "generation gap."  A "living language" evolves.

A concept symbolized by a word has connotations and denotations.

Denotations are easy to translate most of the time, but the native speaker hears a word and hears echos of all the connotations that go with the denotation and all the depth and texture of semantic loading, of emotional associations, and colorations imposed by their own generation -- and by prior generations.

For example, when you hear the word Chocolate, do you FEEL 'bitter' or 'sweet?'  Chocolate itself is very bitter.  But we think sweet because we are accustomed to sugar that's lightly flavored with chocolate.

Note how an English word may overlap a small arc of Mandarin and another Arc of Hebrew -- but coincide reasonably well with both only in that tiny section in the middle.  And even there, there are discernible differences (symbolized by the colors).

You might say an English word with most of your meaning at the top of the orange circle, and the translator could only find Mandarin or Hebrew words at the bottom of the English set of associated concepts where the circles overlap.

But when the translator says that word in Mandarin, the listener would "hear" all the connotations and associations and allusions contained in that word's Mandarin circle, barely noting the area of definition where there is an overlap, and never knowing of the existence of the associations you actually meant.

I've had novels "translated" -- they are unintelligible in the translated form.

The same overlapping circles effect is true even within a given language.  That's why children invent their own words and define their own circles.

No two people know or use any given word in exactly the same way because we each have different accumulated connotations that we attach to words as we learn them, and emotional associations that are evoked because of subsequent experiences.

So consider the three circles as three people - mother, father, child - earnestly discussing when they will arrive at the child's friend's birthday party. "Now" does not mean "now."

If such variance exists among speakers of the same language, consider how different languages express views of the world that are inherently different and literally untranslatable.

No two languages divide the world into the same circles of definition.

The word, "interesting," is subject to this very interesting effect.

Those who know only one language and culture learned before the age of 7 (the age at which language brain centers start to become set), can't grasp how the very words we use shape our perceptions of reality and limit our imagination.  Things that are commonplace to some people are unthinkable to others -- simply because of language.

We think in words.  That's why children make up words to talk to their friends of the same age.

The classic examples from Linguistics include Navaho, and other Native American languages that depict TIME not as a linear arrow, but as something else.

No amount of translating could work through this conceptual problem.  The solution then employed was to conscript Native children into American schools and inculcate the linguistic domains of definition (and ethics, morals and religion that go with them) into the child at an early enough age that the child would grow up to be employable (which was deemed the key to happiness).

OK, none of the real history was that simple.  But a lot of it hinges on words providing limits to what we can conceptualize.  There are many such examples in cultures around the world.

If this kind of gap is possible among humans, just imagine what we may run into on some of those planets now being discovered "out there.'

Hebrew, likewise, handles the verb TO BE in ways entirely different from English.

This kind of miscommunication is the ESSENCE OF CONFLICT.

Resolution of conflict is one essential ingredient in climaxes.

Anticipating a climax is the essence of "Interesting."

Next week we'll look at "boring" for clues about how to write "interesting" stories.