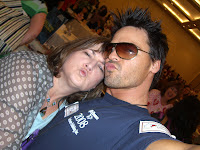 Wow, so much happened it eight days that it is hard to even remember what the beginning was like. So I’ll just have to do it a day at a time.

I arrived in Pittsburgh on Sunday after driving six hours with the back of my car filled to the ceiling with promo stuff for the Intergalactic Bar and Grille Party. I met Linnea Sinclair and Stacey Klemstein at the airport and we left for the hotel after having a great laugh when we saw an exit for Moon Beaver PA. From that point on Isobo Kelly’s baby was referred to as Moon Beaver. I shortened it to Moon Beam. I like that better. The four of us had a fabulous dinner at a restaurant called the Palomino and had a great time catching up on things.


Monday I was privileged to have the chance to speak at Bobbi Smith’s advanced writers course. I talked about creating internal conflict and research in two different workshops. I loved seeing the excitement of these writers and especially loved catching up with them during the rest of the week. Good luck to all of you that were in those workshops.

Monday night my friend Chris Winters who was participating in the Mr. Romance pageant arrived and we talked for a long time. I really enjoyed having the hotel to a small group because I knew in twenty four hours all hell was going to break loose. I warned my favorite Bellhop Val what he was in for. I’m not sure he really believed me.

Tuesday taught another class and then got to go out on three photo shoots with Annette Batista of Between Your Sheets. I had walked around downtown Pittsburgh a bit that morning and have to say it is the most beautiful city. My room had a view of the two rivers, the Steelers stadium (I love NFL Football) and the ridge opposite with the most beautiful old church and houses. Wish I would have taken pics but kept forgetting too everyday.

Went on totally enjoyable photo shoot with Chris Winters. I told everyone I was his personal assistant since I was keeping track of all his stuff. It was a blast and I learned a lot. Photography has always been a hobby of mine and it was amazing to watch Annette to her magic. Plus Chris just lights up a camera.

Came back and had lunch with the amazing women of Between Your Sheets. Then got invited to do more shoots. Went out with John Fish of the amazing humongous muscles. We even got him to unbutton his shirt out on the street. Have to say women were tripping. Then went out for photos with the adorable Christopher Howell who is beyond sweet. I hope next year he shares some of his dance moves with us. He teased us a bit at the pageant. I want more more more!

The amazing and totally priceless J.C. Wilder arrived and a group of us went to Max and Irma’s for dinner. Have to say we closed the place down. J.C. decided it was her project to make me yeep. And she succeeded. I also spewed. Needless to say there was much laughter. The hotel was filling up fast and Val the bellhop gave me a ride on his amazing cart. He also made an amazing amount of money in tips. I saw Mark Johnson arrive and he gave me the sweetest hug. He truly is a great guy. So sweet. Also saw the totally vivacious Jade Lee whom I adore. A bunch of us went up to Linnea’s room to pack goodie bags for the Intergalactic Bar and Grille party. Came down to my room and ran into fellow Shadow Booty Clan member Liz Maverick where we proceeded to have the best reunion ever not caught on video tape. At some point we will reenact it for the public. Caught up with the last third of our terrible trio, Marianne. The two of them make up the Rebels of Romance. I just kind of hang around and terrorize them. 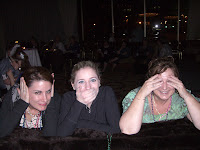 By Wednesday I was surviving on no sleep. I was practically staggering. That afternoon we had the Intergalactic Bar and Grille which was an absolute blast. We gave out lots of prizes. By the time it was over I was so desperate for sleep and so tired that I fell flat on my face in a packed elevator. (Luke Walsh has his own version of what happened. Don’t listen to him. It’s all lies.) Luckily for me there was a hero on board and I was rescued by a very gallant Mr. Romance contestant who saw me safely back to my room.

Wednesday night was the EC Hollywood Glam party. Since I didn’t pack a ballgown I wore my jeans and sneakers and had a blast dancing and making new friends. Finally got some sleep that night. Thursday morning I participated in a writing sci-fi panel and then my RT responsibilities were done. From then on I could just hang out and catch up and talk to people. Thursday night was the fairy ball which I love dressing up for and Lifetime TV interviewed me in my fairy costume. After that we went to Christine Feehan’s speakeasy. I adore Christine, she is truly amazing. Her entire family is wonderful.

Friday I went to club RT and talked to lots of fans of my Colby Hodge books. Caught up with my old friend Bill Freda and John DeSalvo who graced the cover of Stargazer. Then went to a workshop with my new friend Natalie Stenzel. Friday night was more dancing and talking with my wonderful editor Chris Keeslar and the rest of the Dorchester gang, Diane Stacey, Erin Galloway and Renee Yewdaev. Saturday was the wonderful book fair where I signed in between Cheryl Holt and Sandra Hill. Wow was I in good company. I also got to meet Roberta Gellis, who wrote the first romance novel I ever read, Alinor. 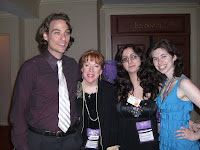 Then the Mr. Romance pageant where Jade Lee and I made a spectacle or ourselves on stage and my friend Chris Winters, who played the part of Zander from Star Shadows in the pageant won. Then there was an awesome bookseller mixer put on by the amazing Dorchester Staff and I met Christina Tanuadji and Veronika Kahrmadji from Australia and Sara Loftus from Huntington WV, which is where a lot of my Wind books take place. Then there was nothing left but the totally awesome Dorchester party where the Impalers, who were sponsored by my good friend Kathy Love and Erin McCarthy totally rocked the house.

I made so many new friends this week. Jennifer St. Giles and the gang at Between The Sheets. There there was Rose, Anthony and Lisa from Crossing Realms. The incredibly sweet and gallant cover guys, Brian, Steve, my boy Luke Walsh, Ryan, Jimi, and of course Fred and Christopher along with my dear friend Mr. Romance Chris Winters. It was great getting to know J.C. Wilder, and Isobo Kelly better and chowing down in J.C.’s room when the restaurants couldn’t serve us and laughing at stories. I adore my new friends, Leanna, Morgan and Stacey, the most amazing bookseller from Grand Central in NYC and I am coming up to NYC for a visit soon. Also have to mention Sue from Troy and yes Sue I am coming for a visit and bringing Luke with me. So many people it’s impossible to remember them all.

All in all it was the most awesome, busy and mind blowing week of my life. I can’t wait until next year.
Posted by Cindy Holby at 9:40 PM