Alien Romance -- and a question of sub-genre 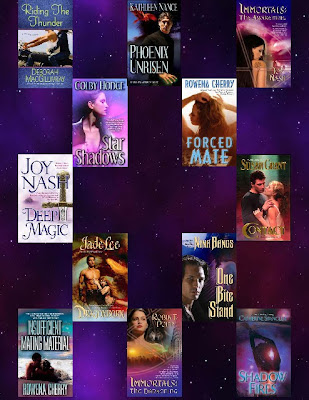 Do labels help or muddy the waters?
Do labels matter?

To some authors, labels, subgenres and categories matter very much, especially at this time of year with so many contests and polls taking place.

Should aliens, faeries, genie and dragonslayers (or dragon lovers) be split off from the demons, vampires, werewolves, shapeshifters and other denizens of the paranormal?

Where should the psychics be? Did it make more sense when the genre was FFandP for everyone? Or, should we have newer, narrower labels.. for instance to keep the fairies out of the space ships? I'm not suggesting, just asking.

Labels don't fit my idea of what I write! Judging by the vigorous discussion taking place on the paranormalromance yahoo group --which I did not start-- a number of writers feel strongly that they don't fit in.

I thought it was interesting enough to blog about.

Linnea's zombies are alien, aren't they? Cool. Margaret's vampires are of alien origin. My aliens have extra senses, and they use the Tarot (and runes, and playing cards) and they think about sex a lot.

Some of us stretch our legs, metaphorically speaking, as we straddle genres.

Sometimes, within a series, different books veer over different imaginary lines of demarcation, at least, I think mine do. 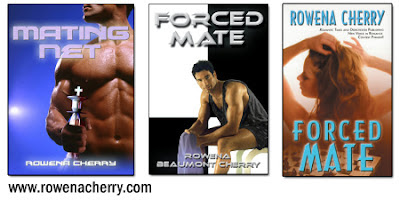 With Insufficient Mating Material, the space ships aren't very important (IMHO) but they are there. The survival skills that Djetth (Jeth) and Princess Marsh need when they are shot down and marooned on a desert island are the same techniques that "Survivorman" Les Stroud might use. In fact, Survivorman was my consultant for the facts in the book... and he gave me the cover quote!


So, I'm quite contented for Insufficient Mating Material to be called almost anything. I'm even comfortable with "Fantasy" though the only "dragon" is a title, and the Djinncraft is supposed to be almost as explicable as any of the physics in Star Trek. It is a sexy book... but IMHO it's not Erotica because the hero and heroine (stuck on their desert island) are entirely monogamous once they get around to it, and there is a happy ending.

http://www.rowenacherry.com/downloads/FFP_Authors_Sampler.pdf
Posted by Rowena Cherry at 9:52 AM