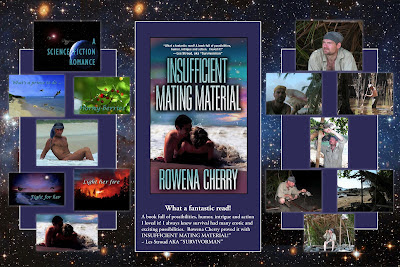 I encourage anyone thinking of buying one of my books to read a free sample chapter from my website or barnes and noble.com, or just stand in the romance aisle of your favorite local bookstore and check out a few pages.

These might be some good pages to scope out for a fair idea of whether or not this book is your cup of tea.


Here is a short excerpt with genuine survival advice.
------
In this scene, the hero, Djetth (pronounced Jeth) and the squeamish fashionista Princess Martia-Djulia (Marsha-Julia) are marooned on a Costa-Rica-like island. They have been shot down, landed in the sea, and Martia's elaborate gown is wet, and she will not remove it.

She is embarrassed about the corset she wears underneath her preposterous Court dress. She doesn't know that Djetth has already seen her corset and more, before his plastic surgery, when he had a wild one-night-stand with her.

Djetth has decided that their first priority should be to get a fire going.

"There are a lot of things we could do without for one night." Dinner came to mind. Sex… Djetth grunted and rose to his feet.

The most natural thing in the world would have been to hook an arm around Martia-Djulia's tightly cinched waist, and point to the campsite he'd chosen. Instead, he put his left hand on his hip and pointed with his right hand.

"You see that little stand of trees -- the ones with twisted trunks, which fork into three or four branches at about the height of my hip? Those two, there, will make good supports for the entrance to a shelter. I'll thrust a long, straight branch between their crotches as a ridgepole."

She looked doubtful, but Djetth was on good ground with his woodmanship.

"A 'crotch' is where a tree bifurcates," he explained, simply so she'd think about crotches, and long, straight objects being thrust into them. "They're a good choice because their canopies lean inland, away from what becomes the obvious spot to clear for a fire pit. Do you agree?"

He took her silence for consent.

"Right. I'll start by digging the fire pit. Do you think you could find something we can burn? There are three types of fuel needed for a fire. Tinder is the most important."

Chivalrously, he assigned the greatest importance to the easiest, lightest, most enjoyable, most feminine task.

"I can't start a fire without tinder," he added with strategic disregard for the fact that he was a Great Djinn in possession of three Rings of Imperial Authority, one of which was the laser-like Fire Stone.

"What is tinder?" she asked, sounding suspicious.

"Ahhhh," he drawled, overcome by a mischievous instinct. "Look here."

With his left hand he lifted his T-shirt, with his right forefinger and thumb he reached into his navel, confident that after eight weeks of hard exercise he had well defined abs and a very deep and attractive "inny" of a tummy button.

"Oh, slurrid!" his squeamish Princess exclaimed, predictably, but she stared at his lower abdomen and perhaps at the bulge in his trunk briefs with flattering interest.

"This fluff--" He placed it in the palm of his left hand as reverently as a scientist explaining an important specimen, "is created from the action of hard work. Friction attracts filaments of fabric from my cotton T-shirt, and works them into a flat, fluffy mat."

He moved his cupped hand closer to her.

"Good tinder needs to have irregular edges, plenty of airspaces." He teased his tummy button fluff into a looser wad. "It must be dry. Would you like to touch it?"
----

PS
Some readers might be interested to recall that in one episode of Survivorman, Les Stroud plucked lint from his socks to use as tinder to start a fire. When I saw Les do that, I sensed that he and I shared a sense of humor, and that he would be the perfect "survival details" expert for Insufficient Mating Material.

Another tip... besides surprising things that are flammable, is that it is better to be naked and dry rather than clothed and wet.
Posted by Rowena Cherry at 4:57 PM