Transgressions of Power is not a Romance, but it is intrigue with Relationships as the story driver, political revolution as the plot driver.  It is a suspense novel set amidst palace intrigue, and all about "power." 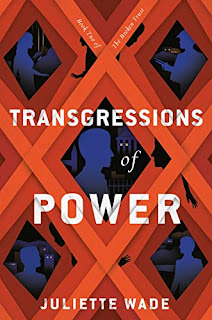 Wade has spent the most time, words, and energy on describing and illustrating the social stratification of a civilization, rather than examining the human compulsion to acquire power over others. Power is the goal of the characters, and the author assumes the reader understands everything she wants to say about power rather than explaining and discussing power-mongering in the root theme.

The external "threat" is a species of flying somethings that kill people on the planetary surface but don't kill people who are in caves, underground.  So the civilization has built buildings in a large cavern with a river flowing through it (noise does not seem to be a problem).

One (of several) lead characters is a woman who has excelled at killing the flying things on the surface, and loves the outdoors, but has been "rewarded" by being assigned a prestigious ceremonial guard position entirely underground.

Other characters are nobles of this civilization struggling over the succession for the "throne" or dictator position while engineering a revolution to overturn the caste stratification.

Everyone we meet interacting with these characters seems satisfied with the caste system, but some nobles want to destroy it. There is no explanation of where the system came from, why it should be overturned (other than that it is a system, and one gains power by destroying systems) or what army will do the overturning and what that army will replace the caste system with that is better (and why it is better).

The author spends most of the book describing the involuted caste system with forgettable names and functions and never addresses any of the obvious questions.

Thus the married couple of nobles trying to overturn the system seem vacuous.  They intend to arouse a populace that is satisfied with their system (even when it leaves them trapped in poverty).

The highly skilled soldier is not satisfied with the ceremonial position, learns something odd is going on among the nobles, and gets herself appointed to be a spy on the nobles.  Nothing in her character makes becoming a spy any sort of triumph or defeat of her personal purpose in life. She's not made of the fabric of a Hero such as we have discussed previously:

The lack of show-don't-tell discussion of these points encoded into the worldbuilding and thematic underpinnings, illustrated symbolically, throws this novel into a category I could only designate as a polemic or possibly a screed.  The novel seems to be expressing disgust for a caste system, a disgust based on nothing. This makes it seem that the author doesn't actually have an opinion of her own on the topic of caste-structured-society, but has simply adopted someone else's opinion.

In other words, the novel has no theme. It is a statement of opinion about caste and maybe somewhat about political power.

Possibly future novels in the series could reveal that the author has thought all this out. Possibly these deficiencies could simply be lack of writing craftsmanship.  But this is the second published book in The Broken Trust series, and I expected more.