Reviews haven't been indexed yet.  Search Reviews on this blog to find more.

Patricia Briggs has been mentioned in the following post on Theme-Worldbuilding Integration titled Use of Media Headlines. 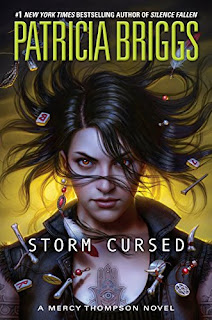 I've recently read STORM CURSED, #11 in the Mercy Thompson series.  Mercy is the lead, POV character, and could be viewed as a "Mary Sue" since she acquires the high regard of a vast variety of Beings as she plows through the obstacle course of her life.

She starts out as an underdog, well, under-were-coyote, and marries a werewolf Alpha, as she gains the high regard of a number of sorts of supernatural creatures.

In STORM CURSED, Mercy has to hammer her way through a major confrontation with Witches who she thought were "White" but turn out to be the worst of the "Black" magic users.

In other words, she has been hoodwinked, fooled, scammed.

We all know that feeling from all the spam phone calls and emails - some of which we (hopefully almost) fall for. You know what it feels like to be a Patsy, even if you've never been a Karen.

Now she knows the dangers and the bad actors, she has to vanquish them.

She gathers her allies (werewolf pack and all) and mops up the problem.

Why is it her problem? Because in a previous novel, she declared in public that she, and the Werewolf pack, would take charge of this Territory and forbid Black magic.

The objective is to be accepted by the human majority as a self-policing minority.

I like this series because Mercy is a genuine person with depths who seems to grow through surmounting her challenges. There seems an underlying thematic reason why she, of all people, SHOULD run "point" on these operations.

Part of that reason is her ability to be open, emotionally bonded to people through her admiration of their better traits and opposition to their lesser propensities.  She improves people she befriends -- and all these "creatures" are people to her, complete people.

I think this series is popular because we see these issues of polarization of society, separating mixed-bag-type-people into camps or teams in order to stage a fight which is a distraction from the real issues underlying the conflict.

Mercy is aswim in the pea-soup mess her world is in, but forges a path toward unifying the disparate factions.

I highly recommend this series.