Previous entries in this series are indexed here:
https://aliendjinnromances.blogspot.com/2020/07/index-to-mysteries-of-pacing.html

Mysteries of Pacing Parts 9 and 10

...discussed showing rather than telling the Character Arc.

So if you can't "tell" the Character Arc Story, but story is all about the intangible, psychological, spiritual, morphing of a Character, how do you convey the Arc, or the Change in how the Character evaluates a situation and how the Character decides to act, and what actions she chooses?

For example: How do you depict the shift in a Character from Republican to Democrat?  From Warrior to Lover? From Poet to President?  How and why do people CHANGE?

Or do they change?

What is the experience of your reader?

To convince a reader that the Character you have designed for them to identify with has changed, that change has to seem plausible to the reader.

This is the "hole" in the comic book, or graphic novel, approach. To stay away from the "slow" parts, to keep the pacing fast enough for young (teen, or younger, even twenty-somethings) you have to skip the important small steps that make it plausible this Character would do That Action.

Adults, especially over 30, know how stubborn older people can be, how "set in their ways."

You, the writer, must understand how the elders in your story got so set in their ways.  The backstory is so important, but you can't "tell" that story, or well ... back up and start the series of novels at the events that shaped those elder's beliefs?

If you show-don't-tell the shaping of a stubborn elder starting with early teens, or maybe 20 something, and progressing through another twenty years, you will have a 20 book series.

We've been looking at a few of those, most recently C. J. Cherryh's Foreigner novels.

Other mentions of C. J. Cherryh are Indexed here:

How do you change his mind on issues he's sure he understands?

We've talked a lot about C. J. Cherryh.  Here is an index of some posts mentioning her work.

And we've discussed several series of novels running 20 books or more, a phenomenon you would not find in Romance Genre prior to the admixture of Vampire, Paranormal, or Science Fiction genre forms with Romance.

In an old fashioned Romance Genre novel, the couple meets, tries to cope with their attraction, overcomes obstacles to getting together, gets together (sometimes to the Wedding Day, often just to "Will You Marry Me?") and that's the end of the story.

We are to assume they live into an HEA lifetime.  And we go on to pick up another Romance novel that starts the same, and ends the same.

The addition of the near-immortal Vampire character, or the problems of relationships with Ghosts, or mythical creatures from another dimension, Aliens from Outer Space, made the "ever after" more interesting, attractive, and problematic.

Falling in love is an adventure in self-discovery -- the amazement that another person could have THIS affect on how you think, what you value, what you're willing to give up to get a life together.

The Second Time Around Romance often captures much of that advanced story arc where both Characters have a complex, rich, backstory -- with pain, with lessons learned, with consequences accepted (children) and avoided.

Romance has come of age, no longer about teen crushes and infatuations, but about real relationships and how another person reshapes you.

But still, you are you.

No matter how "old" you might be, how "elder" in a family or community, you are still you.

The readers of Romance are old enough to understand that, having seen children grow up.

A parent learns the traits of their children from earliest years, what their talents are, the proclivities, and personalities.  There is a sense of each child responding differently to the same home environment.

The Romance reader's perception of the real people around her is that people grow up from childhood by growing into their Personality - not by changing it.

Old advice to youngsters just entering a new situation is, "Be yourself."

That's harder than it sounds. Thousands of experiences shape the contents of that innate framework of Personality, and along through the decades of life, mistakes are corrected, bits discarded, other bits smoothing over the cracks where a heart was broken, and what emerges is an Elder who is as solid as he will ever become.

Younger people who are still correcting their mistakes, trying to find their limits and define "self" see such mature people as stubborn, wrong, set in their ways. fossils no longer relevant to the changing world.

See? Writers know that Character is all in point of view.

The Villain is the Hero of his own Story.

So Character Arc is also in point of view more than in objective reality.

As you age, your point of view changes even though you are the same you.

So, if your Main Character is mature, that Character's "Arc" -- or change in response to the impact of Plot Events -- may be very small on an objective scale. December Romance.

But if your Main Character is a teen, the Character Arc may be gigantic.  Scared Straight.

The Character Arc of  a younger person can change the direction of their whole life, and move an entire civilization.

Now think about a man in his 70's deciding to run for President. How do you change his mind on issues he's sure he understands?

C. J. Cherryh's Foreigner novels trace an all-too-young and unsure of himself (but arrogant in his confidence in his linguistic skills) through the Character Arc (22 books and counting) of mastering the Art of Maturity.

...has learned how inaction can speak more loudly than action.  He has learned to choose when and how to act.  He shoots someone with a gun he's not supposed to have, and saves the day, unraveling a dark plot that could have damaged the economic footing of a civilization. His only other action in the entire book is to quietly write some notes to various dignitaries, and to go talk to people who distrust each other.  Mostly, he sits still and evaluates the various moving parts of the situation.

This makes for a novel replete with intricate exposition about the events of previous novels -- but all from Bren Cameron's now mature point of view.

The shift in how Bren interprets the events he lived through, and the things he finds out from others, shows without telling that this is the same Character from Book 1 (FOREIGNER), but now way out along a Character Arc we can now see without being told. 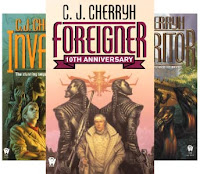 So if you set out to show not tell a major change in a person's character, you will need more space than a few comic books offer.  A single novel won't do it, as each "novel" in a real person's life brings one unique point into view, resolves one issue.

To chronicle a real maturation, you need a long series of novels.

So study some of the long series we've discussed, and translate them into Romance.

Study the Netflix Original, Madame Secretary, which depicts a couple living the Happily Ever After portion of their lives, raising children, struggling to balance home, family, and work.

What lesson of Maturity makes your readers unbearably curious?