Reviews 50
Finder
by
Suzanne Palmer
Space adventure experienced by fully realized Characters meddling in "the affairs of Wizards" (with or without supernatural or magical elements), is another main staple of the science fiction reader which is replicated in the Romance field.

The displaced waif who takes a job as governess for a titled noble, becomes entangled in the situation of the children, defies the father over the problem, falls in love, and attracts the attention of the noble is a staple of Romance.  That is bucking the system.

Both Science Fiction and Romance are genres that cut into the life-arc of a main Character at a time when that Character is a "free radical" -- a molecule with an empty-spot just begging for a bond to form.  Free Radicals, in chemistry, tend to initiate chemical reactions.  In today's Health market, the "free radical" in our bodies is our enemy - not because it's bad, but because it tends to bond and disrupt our chemical balance.

Suzanne Palmer is a Hugo Award winning writer who wins for a good reason - she delivers a whopping good story driven by Relationships carried on a Plot driven by science.

C. J. Cherryh has shown us how humanity can spread to the stars, even without habitable planets in abundance, by building orbiting space stations, self-contained habitats filled with humans who mine their surroundings for materials and energy. 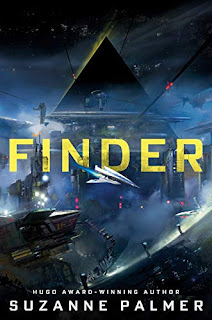 https://www.amazon.com/Finder-Suzanne-Palmer-ebook/dp/B07FC7KWLB/   ...amid a cluster of such habitats, cobbled together from junk right alongside real space stations built with class and money.  She built an economy for these people that would make sense to any reader of Heinlein's novels, and expanded the old profession of "Repo Man" to repossess spaceships instead of just cars.

Yes, you can buy a spaceship on credit, and if you don't pay up, your space ship will be gone -- even if you are an arch-criminal running an interstellar empire of trade.  If you don't pay, the ship just turns around and goes home.  Well, it does if you don't disable or reprogram the A.I. that runs it.  If you do that - well, the owner will send Fergus Ferguson to pick it up, and he has the secret password.  That will work, if only he can get close enough.

Not every professional repossessor could or would tackle the job, considering who might be upset.  But Fergus has a deep and wide acquaintance with the criminal enterprises of the galaxy. He's leery but not daunted - and he needs the money.

Things don't go quite as he expects when he arrives among the connected habitats.  The locals are embroiled in some political issues that leave him stranded and at the mercy of -- a woman.

As noted in Reviews 49, Bucking the System
https://aliendjinnromances.blogspot.com/2019/12/reviews-49-bucking-system.htmlis what we do, and what we love to read about.   In FINDER, Suzanne Palmer flings Fergus into the arms of the Vahn women - who own and live in one of the habitats in space.  They are all clones and just mind their own business until the system bucks them.  The system will be sorry. Trust me on that.

Fergus starts out thinking he's just a loner by nature. His story is about how he comes to a new opinion on his own nature.  The plot is about how this backwater cluster of human habitats deals with First Contact with apparently hostile Aliens.

Note, this is Book 1 in the Finder Chronicles. Fergus doesn't always repossess items from defaulting purchasers.  He has been s thief and a con artist, and uses those abilities to solve problems.  One problem looming is the new species of Aliens, and there are more adventures in store.