Previous posts in this series:

What's Eating Them and the knowledge of it brought to articulation is the THEME STATED moment.

There is no right way to write.

You can start finding, chasing, constructing or spinning your story at any point or with any element we've discussed. Sometimes novels surface in your mind as a single line of dialogue, sometimes as a visual scene, or sometimes a bit of music.  Anything can be the first inkling you have an idea for a story.  Start anywhere.  But by the time you're done, you will have all the elements we've discussed in place.

It's easy. And clarifying the theme avoids the worst criticisms of readers. 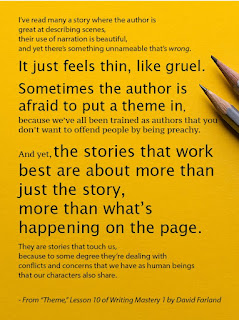 Within a few pages of the impending ending, one of the Characters will blurt out the THEME and state it baldly, in words, as a way of restating the thematic statement on page 5 or so of Chapter 1.

You first symbolize the theme to cut out the material that you will sew together into a statement about life, reality and everything.  Then you unfold the story, like a flower opening, revealing the heart of the matter.

Then, you reassure the readers that they've understood what you've been saying by a Character saying it -- just straight out, boldly, in-your-face, and with finality and emphasis.

That's difficult, and often takes many rewrites to get the correct line of dialogue from the correct character in the correct place in the narrative.  But you can see it done in the most popular novels, and you will know when you've done it yourself.

It is your finale, and then just a few loose ends to tie up and let the readers cool off gently into a view of the long, happy ever after ending.

The story is over, but life isn't.  This THEME (whatever you've chosen) will continue to embroider, decorate and elaborate your Character's life.  It is a truth the reader will now notice in their own life, eternal truth.

That is theme.  It might be the last thing you bring to the surface of the novel in final rewrite, because you don't know it yourself, but you are not DONE writing until you have the theme-thread pulled through every scene, every character and every plot event -- culminating in the lesson learned.

Learn to view theme as the core of story, and conflict as the core of plot.  Integrate theme into every element, Character, Story, Plot, Description, Dialogue, etc etc.  It is most important in Worldbuilding.  Make your world make sense to your reader by stating the theme in every aspect and element of your World.

Make it match, like a decorator pulling together a room, with carpets, drapes, upholstery, and just the right flower vase to hold just the right flower.  That color shading that gives the "matched" look to a room is the equivalent of the theme of a novel. Find the theme after you write the first draft, then on rewrite, delete anything that clashes with the theme that turns up everywhere.

Create a palette of theme, and lay your story on top of it.  Make all the "colors" of the emotions and settings match - no false notes, no stray threads, everything neatly arranged in a set.  Once you know the theme, you will see what doesn't belong.  Snip it and save it for the sequel.

For further clues about how to structure Theme into your Plot, see the SAVE THE CAT! Series. 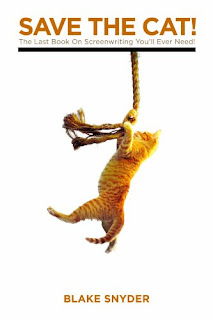