In Part 4, we looked closely at the TV Series The Orville, first season.

Now we will compare that brilliant TV writing to a novel, a completely different story-medium.

I like Dave Bara's novel series, The Lightship Chronicles, which we discussed previously:
https://aliendjinnromances.blogspot.com/2017/03/reviews-31-dave-bara-lightship.html 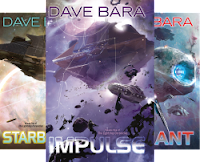 I like and even love them because of the presence of various favorite ingredients of mine. So I'm biased in comparing these two stories THE ORVILLE and LIGHTSHIP CHRONICLES - one arising as homage to STAR TREK and the other exploring what happens to humanity after we spread to the stars.

After the Star Trek epoch of human history, when the civiliazation we have built collapses, then what do we do? And why do we do it?

Sound familiar?  Yes, my interest in that question dates back to way before I sold my first story -- which is the Sime~Gen story, Operation High Time, set in the epoch after the collapse and even after the rebuild of Earth's civilization when humanity is at the verge of exploring the Stars (again?).

So variations on that far-future story are irresistible to me.

Dave Bara has created a universe with a different History from what I have played with but retained the element of "Love Conquers All" that is my special interest.

In Bara's hands, the Romance theme becomes more a matter of "Love Conquers All After Love Causes All The Problems."

Problems caused by Love are usually the worst sort.

So while both THE ORVILLE and LIGHTSHIP CHRONICLES have strong elements of STAR TREK (the Galaxy spanning canvass), lots of explosions, fireballs in space, daring rescues, etc., they are each designed specifically for their delivery medium.

As I have noted in the Theme-Conflict Series, The Orville is tissue thin drama, hammering on Teen Themes played out in Adult lives - a miss-match that annoys a lot of folks who grew up on Star Trek.

The Lightship Chronicles are dense drama, hammering home one of my favorite master themes, "Don't judge a book by its cover."

Or put a more old fashioned way, "All is not as it seems."

The Orville is "on the nose" in theme and dialogue.

The Lightship Chronicles strives mightily to stay "off the nose" and only fails in action scenes.

The Orville is a stripped down, crystal clear (to adult viewers) depiction of a life of adventure working beside various Alien species -- comically recreating 21st Century social issues (such as prejudice against gelatinous beings as Chief of Engineering) -- a broad parody of current US culture for adults that seems plausible to the kids it is aimed at.

The Lightship Chronicles is a deep, complex depiction of interstellar trickery, betrayal, illusion, power-play strategies, firm alliances, trustworthy indivduals in a non-trustworthy bureaucracy. The substance is adult fare -- the writing craft inadvertently creates the Marty Sue effect referred to in my previous review of the Trilogy.

If I were 10 years old, reading this trilogy and watching The Orville (not acquainted with the previous decades works), I would be screaming for the depth and substance of the Lightship Chronicles done as the TV Series The Orville is done.

I wouldn't know as much about why I see it this way, or why it could never be this way.  So I would set out to make it this way.

The themes and conflicts that are possible on TV (even now that we have the episodic structure of series replacing the anthology structure Star Trek had to use) are expanding as the audiences become redefined.

The Orville is a major network, prime time, production aimed at the broadest and thus lowest common denominator -- what is called, in screen writing, High Concept. So it has to glue more eyeballs to the commercials than a novel.

A printed novel doesn't have to glue eyeballs to the page.  It has to induce individuals to part with a chunk of change, and that's it until the sequel is published.

These two different functions define the difference in content.

However, if you've been following my "changing world" posts,

...you know how enthusiastic I am about the expanding opportunities for video-production storytelling to reach small, but well defined audiences.  Streaming, and "originals" from Amazon, Hulu, Netflix, Apple YouTube, and more jumping into the fray every year, provide platforms for works to reach a narrow audience in a cost-effective way.

That audience may have narrow tastes but it is scattered worldwide.  Netflix is distributing (and redistributing) worldwide. I watch non-USA produced TV Series on Netflix and Amazon (with subtitles in English!).  Many are more substantive than US TV fiction.

Long series with deep, complex themes are beginning to appear.
However, most of the deepest and most complex video drama series are running one or two seasons, not twenty years as is necessary for the real depths to emerge.

There is hope to see some of these complicated novel series with abstract IDEAS (science fiction is the literature of ideas, and must become the video of ideas very soon!) to reach small audiences via streaming-original productions.  Pilots for such series are now appearing as 90 minute movies, not labeled pilots.

Soon those small streaming video audiences will be nurtured by additional offerings, and the numbers watching will grow to commercial success magnitudes.

Small is not a property of "streaming" as a delivery channel, but rather of the type of theme and which of all the conflicts inherent in that theme are deemed most popular.

Right now, the prevailing theme that The Orville (and The Lightship Chronicles) are bucking is, "Success = murder, theft, dishonesty, trickery"

The only way for a Hero to win is to break his/her code of Honor, and breaking that code makes the Hero righteous.

Dave Bara uses the novel structure to pose the question, "When, Why, and How must we destroy to survive?"  Many thematic questions of right and wrong -- and of Identity -- are posed by the material Bara is working.

The scene structure craft deficiency Bara displays leads to his Characters coming off as children (not very bright ones, at that).  So he generates every action scene by the orders of the one Character authorized to give orders being challenged, discussed, or suggestions being made DURING the action.  In real life, this behavior leads to the questioners dying very quickly, and the rest learning when to speak and when not to.

Scene structure and information feed skills we have discussed in these Tuesday posts would cure that quickly, and re-form this marvelous material into something that could translate to a TV Series.  I think it could be made into something that would draw a wide audience.

The strength of Bara's presentation lies in the Main Character having a trait of "Intuition" -- he just knows things that others don't.

On The Orville, the First Officer (ex-wife of the Captain) likewise has Intuition but focused more on reading people (of various species).

Yes, the oddball trait of knowing things others don't, things the Character can't possibly know but does, is one of the main ingredients in stories I love the most.

Bara's Main Character is right, bucks authority, acts on his own recognizance, and wins.  He's my guy.

It's clear why his subordinates don't take his orders without question.  But placing the questions during the action destroys the effectiveness of this trait.

Do an in-depth contrast/compare between Bara's Peter Cochran Character and: 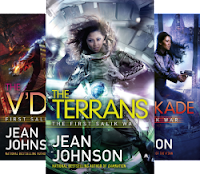 Both rise from lower ranks to Command Rank, just as Bara's Peter does -- for similar reasons, a lightening fast intuitive response to danger, and to knowing what others believe you cannot possibly know.

All of these action-science-fiction Characters, Ed Mercer of The Orville, Peter Cochran, Ia, Kitty Kat, have spouses and/or ex's, lovers, affairs, or prospects. They are complicated people with complex Relationships driving them.

This Character portrait was DISALLOWED in Action-genre in general and in Science Fiction in particular for many decades.

We take it for granted today -- but it is new, powerful, and the signature of a maturing audience that such Characters sell action stories.

There is hope for deep, broad, far-ranging thematic compositions to make it to the Big Screen theatrical release, or 20 year TV Series (TVs aren't so "small screen"ish anymore.

Check out the TV Series on Netflix, "Transporter" a 2012 spinoff made from a Movie Trilogy.  Big screen to small screen evolution.

It is a pure action premise (I could wish this guy could teleport; that would have made it more interesting to me).

And it follows the rules we've been talking about:

-------quote------
Transporter: The Series (French: Le Transporteur : la série) is an English-language French-Canadian action television series, spin off from the Transporter film series created by Luc Besson and Robert Mark Kamen. It was co-produced by the French Atlantique Productions and the Canadian boutique entertainment company QVF, Inc., and broadcast by M6, RTL Television, The Movie Network, and Movie Central. Originally, HBO and Cinemax were involved,[1] but they dropped out in 2013.[2]

The series follows the events and concept of the film trilogy, continuing the adventures of Frank Martin, a professional freelance courier driver for hire who will deliver anything, anywhere for the right price, and lives by three "unbreakable" rules, which he frequently breaks. Chris Vance takes over the role of Frank from Jason Statham and was joined in season 1 by Andrea Osvárt as his office manager Carla Valeri, Charly Hübner as mechanic Dieter Hausmann and François Berléand, the only returning actor from the film series, reprising his role as Inspector Tarconi.[3] The second season added Violante Placido as Caterina "Cat" Boldieu, his new booking agent. Unlike Carla, who did not make it to the second season, Cat usually joins Frank on his adventures.[4]

Twelve episodes were ordered in 2012 for the first season with an overall budget of US$40 million or €30 million.[1] The show premiered that year on 11 October in Germany on RTL, and on 6 December in France on M6. The Canadian premiere was on 4 January 2013 on HBO Canada and Super Écran 1 (with the first episode available online from 18 December 2012).[5] The series started broadcasting in India on 25 January 2013 on Sony PIX, and premiered in the United States on TNT on 18 October 2014. Twelve more episodes were ordered for season 2, which began production in Morocco in February 2014.[6] Season 2 premiered in Canada on 5 October 2014 on The Movie Network and Movie Central,[7] and in the United States on TNT on 29 November 2014.[8]

On November 26, 2015, it was announced that the series was cancelled and would not be renewed for a third season.[9]

The series premise didn't even have teleportation and they couldn't sell it as a Gunsmoke, 20 year project.

The theme bundles contained within "Might Makes Right" are waning in popularity.  Questioning that theme, posing different problem solving strategies (e.g. "Love Conquers All") now has a chance of reaching a receptive audience -- an audience to be nurtured.