Reviews 34 - The Implausible Made Real by Jacqueline Lichtenberg

The Implausible Made Real


As the AI singularity approaches, social values are experiencing whiplash as strong and turbulent as this year's hurricane season.

In fact, global warming may be accompanied by a kind of values warming.

People rely more now on modern society, what their friends (often strangers known only on Facebook, or met by chance at a street rally) believe, than on Ancient Mystical texts.

Countercurrent to this is a revival of Spiritual Pathwork, a neopaganism, pursued by those who sense a non-material aspect to our reality, or wish they did.

And most astonishing of all, there are megachurches forming all over.  This year I've heard of new giant churches being built in Texas and Arizona, right in the heart of their respective radical socialist populations.

The philosophical life of your target readership is swirling as energetically as the hurricanes scouring buildings flat.

People get caught up in the fury of the moment, usually in details of matters they can do nothing about, except donate some money or pray.

Meanwhile, fiction on TV and movies -- and books -- portrays the fraying and broken families, severing links of love and understanding between generations -- grandparents are not revered simply for having survived.

So what seems plausible to the modern reader is very different than it was just twenty years ago.

In fact, today, a good swath of the Romance Reader target audience is convinced that the past was never good, and all the great historic figures were dirty rats in angel's clothing.  Tear their statues down quick before someone gets the idea that we respect their accomplishments (even the accomplishments that weren't racist, few as those may be.)

We are rewriting history (again).  Remember, history is written by the victors, and the vanquished rarely get a fair shake.

So if you set out to write an "off-beat" Romance, one that challenges current notions of right, wrong, good, bad, and the decisions made by those who lived in a different epoch conforming to different values, then you have to give some thought to plausibility.

The Implausible can be made Real to a readership by explaining it from a specific and well established point of view - a Main Character's point of view where you can follow the decision making process step by step.

Way back when, the Romance field frowned on sequels and never did reprints.  I know established best selling Romance writers who were appalled when an older title of theirs was reprinted.  Romance genre was regarded as read-and-toss fiction.

Today, that trend has reversed and we now see Mystery Romance series about the same characters, and Paranormal Fantasy series, and so on - with an ongoing and evolving Relationship.

One of these, which I've recommended many times, is by Simon R. Green -- two distinct series with different characters, set in two separate worlds, but both belonging to the same built world and followed for many novels.

Green is now converging these two series in a very natural way.

One is about "the Nightside" -- a literally dark world where all manner of perversions and creatures abound --- and The Secret Histories (of the Drood family.)

We follow a Witch and a Secret Agent from being mortal enemies to being lovers, and now a very committed couple.  They are obvious soul mates, but their lives in this wild fantasy/magic world interefere with their settling down to raise children.

In fact, the total lack of children running around the Drood family castle/home just rings false to me as the characters keep referring to growing up there.

The two novels in question today are actually one novel published in two books.  It looks to me as if Green just wrote this very long story, and the publisher decided it had to be severed in half because it was too big.

The first of the two is titled DR. DOA,

and the second is MOONBREAKER.

DR. DOA starts with the realization that the main character, Eddie Drood, has been poisoned with something that can not be identified (possibly unearthly origin), and is relentlessly dying.  And it ends with a solution, hinted at obliquely by an oracle they consult along the way, that depicts poetic justice at its very best.

The plots of all these novels move from odd location to more and more bizarre and implausible locations, with combat against ever stranger and more twisted opposition.  Victory is not always assured, and never without cost.

The Witch and the Drood rescue each other, fight side by side and back to back, and drill relentlessly forward toward their shared goal.  In these two novels, the goal is to cure the poison eating at Eddie Drood.  The poison is implausible, the cure is implausible, and the ending makes the implausible real.

The banter among the characters -- including a flying, time and dimension traversing, talking dragon (yes, fire breathing) -- is bound to tickle any BUFFY THE VAMPIRE SLAYER fan.

The writing is relentlessly smooth, seemingly effortless, as Green is a virtuoso of wordsmithing.

So these are easy to read novels, and easy to remember so it is easy to pick up the next book a year or more later.

This is writing worth studying just for the techniques, but the underlying story is a pithy commentary on the modern world around us, as it has been, as it should be, as it will survive to become.

The Witch and the Drood are partners, and Soul Mates, equals in power, intelligence, imagination, determination and moral strength.

They do, however, not share exactly the same moral code at the beginning of their relationship -- and very gradually, over many books, corrupt each other.

The Witch loves punching adversaries with her magic -- and is a former Magic wielding Terrorist.  Eddie Drood loves solving problems with psychological judo these days, but has been a proponent of clean devastation as a solution that lasts.

They have each, separately, been to the Nightside, the location of the other branch of this series. 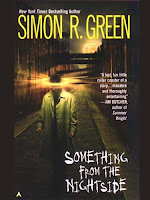 Now they have been summoned to deal with a new problem together, the violation of a treaty that keeps the Nightside separate from the day.  The Nightside is expanding -- and must be stopped.

Do you see the Gulliver's Travels style social commentary on today's politics in that?  Treaties broken, advancing armies taking Territory, and an underlying tussle of a debate about whether to stop them with brute force or somehow negotiate without killing (very many) opponents.

The battles cross dimensions, time, and space, and reveal a panoply of creatures (some quite horrible), most of whom might eat you but not consider you an enemy.

These two Characters, the Witch and the Drood Secret Agent, combine the very traits that made them arch enemies into a Force the enemies of Earth and us muggles truly fear.

This is the Implausible made Real by the Characters -- because you can't help but wish we had heroes like this.

On the other hand, maybe we do.

Study how these novels, set in two world of the same Universe, show us ourselves through a Romance tinged lens.