Here is something to watch for and think about.  Fitting your own stories into publishing is somewhat like jumping Double-Dutch -- it is all in the timing.

Whether you like it, or hate it, or don't care, there is a trend in fiction that appears in novels, movies, TV Series, and other forms such as the graphic novel, and games.

It is a story type trend.  Story is all about what is going on inside the characters, specifically the main character.

The plot is all about what this Character does and what those deeds cause to happen, to which this Character then reacts by doing something else -- until the conflict is resolved.

The conflict embodies the theme -- the statement about the true nature of reality that this novel explains and illustrates.

The story of "an orphan who finds true love" -- involves some sort of conflict woven from a strong spirited Character in conflict with his/her  loneliness, bereavement, helplessness.  The orphan "finds" (i.e. does something) to solve the loneliness problem, and love-conquers-all resolves the conflict.

The story of the widow who moves West easily houses the conflicts built from themes of "new starts" -- of having nothing to lose, of making a bold leap of faith.  The conflict is the strong Character confronting the bereft and hopeless situation and either running away or running toward a dream.  The conflict is resolved by finding a new community, and opportunities.

To fit into Romance genre, such a story has to end naturally in a Happily Ever After situation.

So the writer has to show-don't-tell what qualities this Character has inherent in them to make it possible, natural, or even inevitable for this Character to reach such a reward.

The classic method of showing the Character deserves Happiness is to show the Character learning a hard lesson the hard way, and along the way adoptiing the habit of Charity and Good Deeds.  SAVE THE CAT! (the book about screenwriting I recommend novel writers study) points out that the most efficient way to convince an audience that a Character is worthy is to "save the cat" -- to put the Character in a situation where he risks life and limb for the helpless.

So today's trends, if you slice and dice enough TV Series and novels, are the story of a Character who starts off with strong ethical and moral principles, would indeed save a cat from the top of a telephone pole, or rescue a kitten from a storm drain, but the story is about how this worthy person is brought to a point where they violate their own ethical standards.

Some expect to "get away with it" and others expect to "pay the price." 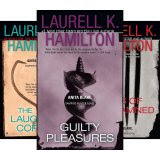 But the one story-form I am seeing the most is the story of the moral corruption and devolution of an otherwise strong and admirable Character.  Anita Blake, Vampire Hunter is a great series, very popular, huge best seller, and except for a few books, mostly very well written.  But it is the story of Anita Blake
violating all the precepts she holds dear in Book 1, and learning to make excuses, wallow in the practical necessity of surviving, and finally embracing all she loathed at the beginning.

Decades ago, the prevailing story was of the weak Character, vacillating, hesitate, out-classed and out-gunned who man's up, steps up, takes charge, and grows stronger for the experiences of the story -- a character who learns from the lessons life teaches, learns the basics of wisdom.

If you start with a Character that has perfected strength and wisdom ( Obi Wan Kenobe ) you have to devolve him or kill him off.

If you start with a wimp, you can build him into somebody worth knowing.

If you start with a Character in the middle, neither so wise or so weak, you can go either way.

And between these two swings, you will find a prevalence of stories about Characters who don't change (like TV Series Characters in an anthology series), they don't learn from their mistakes and adventures, but spiritually tread water.

Sometimes audiences just want to relax and have their lazy, static lifestyle validated.

Find the trend your story fits into and start submitting when the previous trend has hit peak.  Ride the trend waves.