Reviews 30 The Ghost At Beaverhead Rock by Carol Buchanan

This novel is about what makes a man into a husband and what kind of man can not be transformed like that. 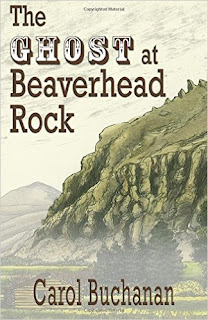 It is about the very serious stuff you find in Historicals as well as about the things you hardly ever find in Romance.  And it is about what traits portend that a man will become a good father.  All of this abstract (face it: boring) stuff is just background for the torrent of forces configuring the Territories into what will be the United States of today: what is an Economy?; what is Law?; what is Authority?

All of this is blended with a strong author's hand into a smooth reading, fast paced read you will work fast every day to get back to reading in the evening.  Writers should analyze this book for scene and chapter structure, for pacing (rate of change of situation), for how Characterization is depicted using actions not description.

The Ghost is 4th in a series that has garnered some awards attention and deserves more. Lots more.

The previous novels are God's Thunderbolt, The Vigilantes of Montana, and Gold Under Ice.

Here are the Amazon links:

Book 2 - The Devil In The Bottle
https://www.amazon.com/Devil-Bottle-Vigilante-Quartet-Book-ebook/dp/B006H7I4AI/

Or you can find them at the author's website

Here are some posts I've done here previously about this series:

So you see I've been following this series as it has developed, and it is literally a "can't put it down" read if you are interested in Science Fiction Romance.

Remember, Star Trek was sold as "Wagon Train To The Stars" -- a western set in space.

Science Fiction and Westerns or Historicals are kindred genres because they are about facing "The Unknown" and figuring out how to live and thrive in an alien environment.

In fact, come right down to it, marriage is itself a matter of pioneering an alien environment, a partnership between two strangers who think they know each other.

Pioneering is about moving into strange, mostly empty territory and figuring out how to create a government and an economy.  Marriage often enters the empty territory of a two-person home which, little by little, adds children -- and every year of their lives is new territory.

So this Vigilantes series starts with a heart-felt Romance, wistful, ernest, and full of promise and insurmountable obstacles.  And then the series challenges that marriage and re-creates it on new terms.

This story of a marriage is thematically parallel to the "marriage" of the new Western States into the Union, which at that time was being challenged by The Civil War which shattered families, brother against brother.

The series is set (mostly) in the West where gold was discovered, and depicts the way fighting over claims pitted men (and women) against each other.

It seems to me this is the story of a woman who "mines" a man's heart for the gold hidden in his depths, the incorruptible noble metal, soft and malleable hidden within brittle quartz.

This series is a solid example of how to apply the skills we have discussed in the series on Depiction and the series on Symbolism.