Previous parts in the Depiction series are indexed here:
http://aliendjinnromances.blogspot.com/2015/04/index-to-depiction-series-by-jacqueline.html
Social Class is much in the news these days.  Older works such as MY FAIR LADY don't qualify these days as a model for how people from different backgrounds move up or down in the world, because many of the features of "class" that mark humans apart have changed.

In fact, a writer of Alien Romance should examine the entire notion of "up" and "down" as a model for social structure.

One thing that distresses so many governments around the world about the Internet and all the social media is that this world wide conversation loosens the government grip on what the people think -- because the internet changes what people know (or believe to be true.)

Thought control is essential to some kinds of government.

So one objective of those who want or need "control" over others is to freeze individuals in a social stratum, maybe make that stratum large enough that individuals can feel they are rising in the world without leaving their stratum.

Non-humans might function in an entirely different way -- thus leading our Human governments to mis-interpret actions or under-estimate Alien individuals.

But you are writing for a human readership, so you need to depict the alien behaviors in a way that allows your reader to connect with your aliens.  Or alternatively, you may want your readers to feelno connection at all to your Aliens (so you can have a nice war).

Spock was the "Alien" Character that Gene Roddenberry invented to look at humans from the outside and comment on these odd human foibles.  His original idea was to have a female First Officer who was emotionless and a half-Vulcan Science Officer who was ultra-smart.  The network would not allow a female First Officer because women can't order men around - it is not plausible that men would obey (right?). So Gene Roddenberry saved the Spock Character by making him the First Officer.

You, as a writer of Alien Romance, have to learn to think that way -- it is not a compromise, but a matter of artistic integrity.

The trick in luring an audience into a built world is to change only ONE thing and make the rest of that world pretty much like the reader's reality.

In the Potterverse, we have our reality -- and a place away somewhere that Magic is taught.  A few Magic Users are sprinkled among the Muggles - but this is the Muggle's world, your reader's everyday reality.

So, how do you depict Recently Acquired Wealth -- a character who has suddenly moved from an impoverished apartment in subsidized housing to a Quarter Acre 5 bedroom house with a pool in the cool, tree filled suburbs?

What is the one visible thing that character would do, would consider imperative, urgent, top priority, after making such a move?

There is now a scientific answer to that question which reinforces the ideas you get from My Fair Lady.  In the play or movie, the initiative for changing dress, walk, speech, of the woman comes from a man.  It is something he does TO her.

In our modern reality, it is something she does to herself.

“When women move from lower-income area to a higher-income area, they pretty much took on the preferences of women around them,” said Galak. “On the other hand, when they moved from a wealthier area to a less wealthy area, what we found is that women pretty much stuck with their preferences.”

Conformity matters to humans (and not just women).  Imagine a world in which government is used as a weapon to prevent individuals from changing their economic stratum.  Anyone who does move (up or down the economic ladder) must change costume and behavior, speech mannerisms, etc., to avoid notice by the thought-police.  In fact, your Character's very thoughts may trap him/her in a way that your Alien character would not recognize or abide.

Here are some of those thoughts that a newly rich person would have to learn:
http://www.businessinsider.com/ways-rich-people-think-differently-2014-5

Now, if you create some very Alien aliens -- truly non-human, maybe more so than Spock, you can SHOW DON'T TELL your reader that these non-humans are potentially good friends by how the non-humans prioritize dress, demeanor, thinking processes, and appearance to "fit in."

This was done exceptionally well on the TV Series ALIEN NATION. 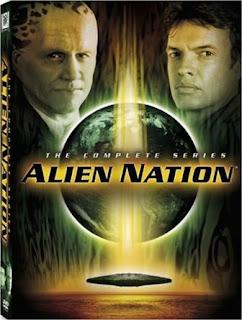 The Aliens were easily understood and accepted because they went to the effort to fit in.  Those Aliens who did not, who rebelled, because the focus of various episode plots.