Nothing could be more intangible than Romance.  You can't see it, taste it, photograph it, measure it, weight it.  You can feel it only with "emotions" -- not the skin receptors that tell you something is rough or smooth.

Likewise, "Values" and even "Culture" are invisible, intangible, imaginary.

But to write a story, the writer must depict (create something the reader can imagine seeing, tasting, weighing) those intangible properties.

We do it the way a Physicist hunts for particles -- in a bubble chamber.  A particle whizzes through a medium leaving a trail of bubbles behind it.  By measuring the bubble trail, the physicist can identify the particle by charge, size, weight if it has any, and so on.

In other words, we investigate and identify our real world by the effect that intangibles have on the tangible.

And they do have effects!

Romance makes people behave "crazy" -- take ridiculous risks, quit jobs with no prospects in sight to move across country or the world, just to be with a particular person.

Why choose that particular person? There are lots of unattached persons where you are -- why move?  Intangibles!  A person's character is composed of intangibles that have a pronounced effect on the way the person behaves, and those quirky behaviors make all the difference.

Most website based match making services will put some weight on the Politics or political values a person holds, matching to someone of similar values.

But many successful marriages that reach Happily Ever After are composed of people of the opposite values.

A Plot Conflict requires a Resolution for the end of the book -- a springboard into a Happily Ever After life where at least this one point of conflict is fully resolved.

So the writer first needs a point of conflict the two will fight over, and a resolution to that conflict the reader will believe at least for a moment. 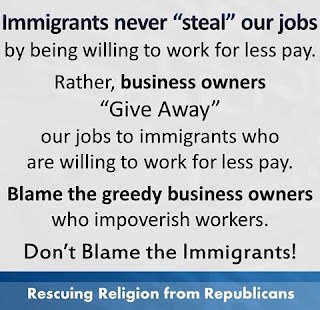 So let's try the Immigration problem -- an immigration of Aliens, as in TV Series ALIEN NATION, always works well if you do the worldbuilding meticulously.

And of course, there is the obvious assumption that immigrants who work cheap steal our jobs.

This is just humanity's innate xenophobia being focused on one vital issue (sustenance).

But this xenophobia is an intangible, a mere trait.  You can not see it, measure it, weigh it, -- xenophobia is imaginary, just like Romance.

Xenophobia can, however, be depicted as a Culture's defining parameter by using something far more "tangible" -- paychecks, income.  The Economy is an intangible, but the effect of the Economy's waxing and waning cycles is very tangible to the grocery shopper.

You can create images, icons, in your writing as you describe a neighborhood, a store, a crowd of people -- worn shoes, ill fitting clothing in tatters, a thousand things come to mind to depict a Depression Level Economy.  "The Economy" is intangible, but it has tangible results.

Likewise Culture is an intangible, which has tangible results.  One of the tangible results of our culture's version of xenophobia is the fallacy of the us/them paradigm -- "Profiling" as they call it.  People learn as children to recognize "us" and stay away from "them."  The human baby first learns to recognize Mom and Dad -- or whoever provides care.  That teaches that "Us" are safe -- and the corollary, that "them" is not-safe comes around age 2 Years.

Note in the Web Sampler image, the word "blame" is used to explain the problem and the appropriate solution.

The urgent necessity to affix blame comes from those early experiences, around age 2 to 3.  If you are designing some Aliens, you need to know (but your reader probably does not need to know) when in development the Alien child is pounded and hammered into shape with the word, "No!" What age do the aliens learn that when they do wrong, they are to blame and being to blame for a mess means cleaning up that mess no matter what.

The earlier that lesson is pounded into the Character, the more profoundly the adult will feel the threat of free floating blame.  Blame can not be allowed to settle over a family in an amorphous cloud. SomeONE must be to blame.  Nothing can ever go wrong that is not the result of someone doing wrong.

It is a child's eye view of the world, to be sure, but your human adult readers can relate to it very easily.  It is a cognitive fallacy that depends on a scaffolding of fallacies to support it -- all having to do with the theology of "Right" and "Wrong," Consequences, and the separation of Authority from Responsibility.

The problem as stated is that we MUST blame someone -- we have to think hard, slice and dice the problem with extreme precision, because it is absolutely necessary to find the correct faction to BLAME.

Because something is wrong, there must be blame, and it must be affixed firmly to the correct source.

If you depict a cultural framework where blame must be affixed, and clearly depict "wrong" as some situation that can be described in images (people out of work), then you can showcase your Characters, their Relationship, Conflict and Resolution, against the backdrop of a Cultural Values.

Like a diamond and a ruby twinkling against black velvet, your characters will stand out vividly in the reader's imagination.

Look again at that Web Sampler -- there are a number of fallacies that are culturally accepted illustrated vividly by those simple words.

The assumptions are that "jobs" are a limited resource in a zero-sum-game.  There are only so many to go around, so if some people get jobs, that demands the absolute result that others will have no jobs.  Nobody can just go make themselves a job.  In this cultural model, there is no such thing as self-employed.

Likewise, in the cultural model depicted in this Web Sampler, it is assumped that those who take less pay are not also "impoverished."

And it is only "workers"  who are impoverished by other workers out-competing them.

These intangible assumptions folded deep inside the utterly plausible statements are cultural assumptions. They make the world plain as day. It can't be argued because it is common sense, obviously true.  That's what Culture is -- something so obvious and clear that only a moron would not get it.

The Web Sampler could be restated as "Immigrants never "steal" our jobs by being willing to work for less pay. They just make labor so cheap, it is cost-effective for us to found our own businesses."

Most human cultures are fabricated out of a handful of fallacies wrapped around eternal truths.

To make your Aliens plausible, fabricate their cultures (current and historical) out of an equally diverse mix of fallacy and truth.