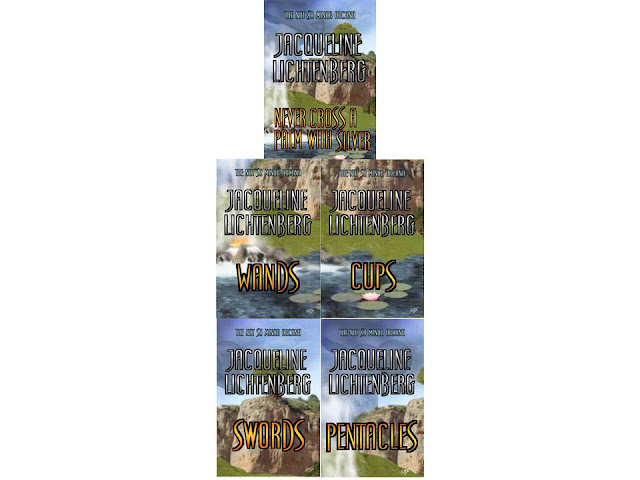 This month is seeing the Kindle-only release of a compilation and substantial revision of the 20 blog posts so popular on this blog about how to use Tarot in writing Romance genre, and all its spinoffs.

Below you will find links to the Amazon pages where these 5 volumes and the compilation of all 5 in one volume are available.

Here is some of the story behind these new releases of non-fiction books started in 1996, volumes that contain thinking dating to back 1972.

That project is the series of volumes on the Tarot that was originally contracted to Belfry Books in 1997.  The first volume was published as The Biblical Tarot: Never Cross A Palm With Silver.

My original series title, now in use on Kindle exclusive editions is The Not So Minor Arcana.

Look at the end of this post for links to pre-order of the volumes on Kindle, or if you're reading this after September 2015, you can download them immediately.

Right after publication of NEVER CROSS A PALM WITH SILVER, Belfry Books went out of business due to the collapse of the Book Distribution business before the next 2 volumes, Wands and Cups, could be published.

I had written the volumes on Wands and Cups, working against the established deadline in the contract, and was ready to deliver them when Belfry Books announced they were out of business.

I retrieved my rights and set the project aside until, in 2006,  Rowena Cherry​ asked me to join this Alien Romance co-blog she had just started.

I'd never blogged, was just barely thinking about doing that, and so of course I said yes!  I love to do new things!

So when I hit on the idea of finishing the set of Tarot Books with a blog post per chapter, I didn't expect anyone to read it.  It's dense, abstract, off-topic, meta-thinking of little interest to anyone.

The blog was about Alien Romance Novels, Science Fiction Romance sub-genre, Paranormal and Futuristic Romance readers, but I wrote specifically for the writers, not the readers, of Romance.
The first two volumes, Wands and Cups, are very abstract, theoretical, written for the Intermediate Tarot student.

The second two, written for this blog on Romance is aimed at the advanced student of Romance Writing looking to add Fantasy and/or Science Fiction elements.  Tarot provides a worldbuilding template that all readers understand without having it explained to them, thus cutting out the deadly Expository Lump.

The Kindle versions on Amazon are re-edited and expanded, substantially revised.

This is difficult material to place with a publisher because my take on Tarot is the opposite of what the market for such books wants.  My thesis is that Tarot is of no use whatsoever for "foretelling" the future.  It won't give you magical power, or any other competitive edge of any kind.

The Volumes are very short, about 30,000 words, too short to publish as a stand alone paper book, and they contradict common beliefs on every page.

In other words, these 5 volumes are of use to science fiction romance writers, fantasy writers, creators and purveyors of imaginary fun.  It's a how-to manual on fiction writing, and a non-fiction presentation of how I created and wrote Sime~Gen and most all my other novels.

These volumes contain the world-building I did as I created Sime~Gen, and some of the other universes, like Molt Brother and City of a Million Legends as well as the Dushau Trilogy (remember Dushau won the first Romantic Times Award for Science Fiction - so long ago, the award is not listed in the online compilation though I still have the little statue), Dushau, Farfetch, Outreach.

Oh, yes, and my Vampire novels Those of My Blood and Dreamspy.  Especially, Dreamspy.  Are based in the paradigm I extracted from Tarot.

These non-fiction books contain what is behind that which is behind the underpinnings behind my worldbuilding.  This behind-behind structure, 4-layers deep at least, is why you can't read the novels and spot the mechanism that generated them.

Because these volumes on Tarot are so short, they could not be released economically through a publisher such as Wildside, which does not have any New Age imprint.

The complete, compiled 5 books together are too big to be released as one, certainly not in a print version.

Compile the 5 volumes into 1, then cut that 1 in half, and any abstract meaning someone might glean would be lost.  The 5 volumes are in fact a single structure, built to a point.

Kindle comes to the rescue with their somewhat new arrangement allowing authors to release titles for 99 cents.  And that's about what these little volumes are worth to readers.  Released through a publisher, they would be $4.50 or so apiece, minimum, which is way too much for what you get.

As we have been working on the Sime~Gen titles and then the video game for several years, I have had no time to take Karen L. MacLeod​ 's edited version of the Tarot books and reformat it for Kindle posting (no small feat; a bizarre process indeed!)

After we sent in to Wildside Press Sime~Gen Vol. 13 (Fear And Courage), and while Zoe Farris​ was polishing up the Concordance Manuscript for me to prepare to send to Wildside, I put the Tarot books together in Kindle format.

Now 6 volumes in The Not So Minor Arcana Series are coming available throughout September 2015.  You can order or pre-order.  If you pre-order, Amazon will deliver the books to your Kindle or whatever device you have chosen for your Kindle books.

There are 5 small, separate volumes, plus one huge all-5-volumes together (which is over a meg of download).  If download size is an issue for you, choose the individual books.

I'd like to know if these books turn up being pitched to you by Amazon.

I hope to make these available free for a time toward the end of the year but I don't know when or if I'll have time to do that.

You can pre-order or order at these web-pages now.

The combined volume is cheaper for you than buying each separately.

These books can all be "borrowed" on the Amazon Unlimited program for free, as can Dushau, Farfetch and Outreach.

Email ThisBlogThis!Share to TwitterShare to FacebookShare to Pinterest
Labels: Craft, Kindle, Tarot, The Not So Minor Arcana, Tuesday, writing craft