Preparing to revise my latest paranormal romance WIP, I’ve been thinking about the motivations of the antagonist. An effective antagonist must have believable goals. It has often been said that every villain is the hero of his own story. What makes a credible villainous motive? In the Dorothy Sayers mystery STRONG POISON, the heroine, detective novelist Harriet Vane, maintains that homicidal mania shouldn’t be used in murder mysteries because it’s “dull and not fair to the reader”—by which I think she means the reader doesn’t have a fair chance to figure out the criminal’s identity if the murder springs from madness. (How the genre has changed since then! Serial killers, the equivalent of the homicidal maniacs Harriet dismisses as dull, are all the rage in crime fiction.)

Okay, leaving aside pathological criminals, what about “rational” motives for villainy? Of course, the antagonist need not be a true villain at all. The plot might turn on a clash between two competing worthwhile goals. For instance, the heroine wants to preserve the local woodlands while the hero wants to build a housing development to provide homes and jobs. In my current book draft, though, the antagonist, an evil sorcerer, qualifies as a literal villain. One common motive for crime, of course, is greed. The criminal robs a bank. The murderer kills his wife instead of divorcing her, so he can get her money. Killing someone to hide a guilty secret would be another credible motive for murder. How about revenge? I’ve used it in my own fiction, such as in vampire novel CHILD OF TWILIGHT, where the female vampire antagonist targets the hero because he killed her brother (in the earlier novel DARK CHANGELING). She chooses to get back at the protagonist by kidnapping and attempting to corrupt his daughter, rather than committing violence against him directly. However, I must admit I have trouble empathizing with the revenge motive. I can visualize myself striking out in anger or fear at someone who’s hurting me or a loved one at the moment. I can’t imagine plotting over the long term to “punish” such a person in cold blood. I’d hope for his arrest and imprisonment so he can’t repeat the offense, sure, but what would after-the-fact revenge get me? What a waste of energy. In fact, if I think too hard about some other common conflict scenarios, I have trouble wrapping my head around them. Suppose a man jumps into my car, brandishes a gun, and orders me to drive somewhere, and suppose I’m alone in the vehicle so I don’t have to worry about anybody else’s safety. If I simply open the door and get out, is he going to shoot me? What would he gain from that? He’s got the car already. Granted, if this scenario happened to me in real life, I’d be paralyzed with terror and no doubt do exactly as he ordered. On a “rational” level, though, his shooting me for disobeying wouldn’t make sense. Another crime that doesn’t feel plausible to me is the “if I can’t have you, nobody else can” homicide, although I know it sadly does happen all too often in real life.

My evil sorcerer plans to open a portal to an alien dimension and invite Lovecraftian horrors into our world. He wasn’t always evil; in the backstory he was an ally of the heroine until their situation became desperate. What rational motive could he have for such an act? I’ve never been able to identify with a goal of conquering the world. What a lot of trouble to go through just to get a job nobody in his right mind would want. That scenario always reminds me of the evil cabal in a Saturday morning cartoon series (I can’t remember which one) that aspired to “destroy the world for their own gain.” Since my villain is supposed to be mainly rational, although slightly unbalanced from grief over his wife’s death, he has to be motivated by something other than the raw lust for power that drives the typical world-conquering dark lord. So he has no desire to rule the world, though he does intend to cooperate with the Lovecraftian entities that are going to overrun it. I hope I’ve managed to give him credible reasons for cooperating, one being that he considers their victory inevitable and wants to be on the winning side. In his home universe, he witnessed the catastrophic outcome of resistance, and the experience has made him bitter.

On a brighter note, my husband and I have collaborated on a fantasy-romance crossover novel, LEGACY OF MAGIC, published by Amber Quill Press a few days ago. It’s a prequel to our sword-and-sorcery trilogy that began with WILD SORCERESS. LEGACY OF MAGIC is designed to stand alone, so a new reader can pick it up with no problem. At the same time, readers familiar with the trilogy can enjoy anticipating the outcome of the events in this “previous generation” story. 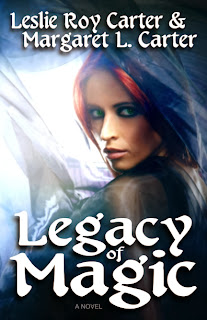