Jacqueline’s penetrating analysis of the new Superman movie somehow started me thinking about theme-plot-character integration in the classic musical OKLAHOMA. I think I may have discovered a flaw in it.

Set in 1906, the movie (which is the only version I’ve seen, but according to Wikipedia, it closely follows the stage play) celebrates the admission of Oklahoma to statehood. Near the beginning, “Everything’s Up to Date in Kansas City” expresses astonishment at the wonders of the modern world. So the story focuses on a new state in a new century. To move forward into this new world, the people of Oklahoma must resolve the differences between their two different subcultures, as highlighted in a song that tells the farmer and the cowman to be friends. These groups represent the perennial, ubiquitous conflict between nomad herders and settled agriculturalists. The theme appears to be the necessity for a synthesis between these factions to create a new society in a new era.

The love story between cowboy Curly and farm girl Laurey symbolizes reconciliation between the two subcultures. The secondary, comic romance between cowboy Will and Ado Annie (the “girl who can’t say no”) echoes this motif. The marriage of Curly and Laurey, along with the engagement of Will and Annie, wrapping up the story like a Shakespearean romantic comedy, demonstrates the blending of the two lifestyles (and perhaps the absorption of the herders by the farmers, since Curly will presumably settle down with Laurey rather than roam the range) as the title song celebrates a “brand new state.” So what’s missing in this summary?

Where does the antagonist, Jud, fit in? Apparently we’re expected to feel little or no sympathy for him, since the designated hero, Curly, can get away with verbal bullying that urges Jud to commit suicide. Jud almost appears dragged in as a pure villain simply to contrive a threat to Laurey and provoke her to admit her feelings for Curly, as well as to provide a dramatic action scene at the climax. Jud embodies the danger that must be eradicated for the marriage and the new society to thrive. Sure, he has a clear role in the romance plot. As the dream ballet sequence shows, he represents the dark side of sexuality, which stirs Laurey’s fears that she has to face in order to embrace her love for Curly. In that role, Jud is Curly’s Jungian shadow. But how does he fit, if at all, into the “new state, new society” theme?

It would help if we knew Jud’s backstory, which as far as I can remember (and learn from reading the summary of the play) we don’t. He’s just labeled “disturbed” and “a mysterious and dangerous loner.” Could he be a cowboy displaced from his job and reduced to the status of a farmhand? If so, he would represent the shadow side of the herding culture being marginalized by the dominant agricultural society and the increasingly urbanized, modern world of the new twentieth century. Or maybe—who else is missing from the musical OKLAHOMA? Completely invisible, in fact?

Native Americans! Oklahoma Territory certainly had a significant Indian population. In preparation for Oklahoma’s admission to the union, Congress dissolved all tribal governments in the territory and redistributed the land. Here’s a large group of people who had to be literally displaced for the new state to move forward into the new century. If Jud is Native American or of mixed-race parentage, his death at the movie’s climax (for which Curly is exonerated in an informal trial) represents the erasure of the people who posed an obstacle to the new society. Reaching a bit? Maybe—but Rodgers and Hammerstein frequently dealt with issues of racial conflict in their work. Could that subtext be present here, even if deeply buried?

Off topic: Last week I completed the first draft of a paranormal romance with Lovecraftian elements I’ve been working on. That means I’ve reached the stage of relief and pleasure in completing the hardest part of the project. At the same time, though, I'm in the phase where I contemplate the result with disappointment at how far it falls short of what I visualized when I started it. I know from past experience that in the process of revision I’ll veer between “why would anybody ever want to read this thing?” and “hey, this isn’t so bad after all, do I really have to mess with it very much?” On a brighter note, I’ve just proofread the galley file for LEGACY OF MAGIC, a fantasy with romantic elements by my husband and me, a prequel to our “Wild Sorceress” trilogy. I get a thrill out of reading galleys because that job means the book is almost ready to face the world. LEGACY OF MAGIC will be released by Amber Quill Press on October 27. 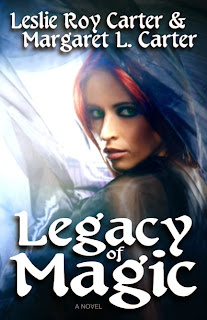