You all know that I'm an SF writer and professional reviewer - if not, please look at this post on the inside of a reviewer's life.

The subject I've been pursuing here for the last few years is the converging of the SF/F fields and the Romance field, and the problem of how Romance can gain the high regard of the general public that it so richly deserves.

Recently we've seen the release of yet another Romantic Comedy film, SHE'S OUT OF MY LEAGUE, March 12, 2010:

And we ask why is "Romance" only acceptable in Hollywood as a "Comedy?"

OK, there was ROMANCING THE STONE and THE AFRICAN QUEEN, but think about Romance-hybrids and box-office respect. Almost all the recent romance films are hybrid genre.

So we note the commentary on IMDB for SHE'S OUT OF MY LEAGUE, and the whole focus on "it's funny" rather than "it's romantic."

The hybrid genre labels as I've pointed out in previous posts are formulated as DECORATION + PLOT-STYLE. SHE'S OUT OF MY LEAGUE is a ROMANTIC COMEDY - a plot structured as a comedy with romance as the decoration. And rom-com is a big seller in Hollywood now, especially in indie films.

Look at the film AVATAR. It's action with relationship as a decoration. At most, Romance is a complication to the action-plot.

But are we seeing a trend gathering toward merging the plot and the decoration into a single, united whole?

What would it take to accomplish that merger?

In a word, CHARACTER.

The essential core of the main character's character has to shift in order to merge the two elements of a hybridized genre. What is considered admirable in a person of solid character has to change. That is, the value, or the standard of admirability has to change from being entirely of one of the genres to being a balance of both genres.

When this kind of shift happens in a culture, new icons emerge, new IMAGES that "tell the story."

Remember what Blake Snyder taught us in SAVE THE CAT! which he learned from his elder mentors - a screenplay is a story in pictures. And remember what I noted about the film AVATAR

Text-fiction writers have to evoke images with words, and so must choose images just as deliberately as a high budget film writer would.

The audience has become fragmented in the USA because our culture has shattered and is reforming around new icons, new images. The hybrid-genre fiction we're seeing now is a result of the search for new icons as change accelerates.

Here are two images to ponder deeply because they say "it all." These might be blended into a new icon if we can find the common meaning.

The cover of TOUCHED BY AN ALIEN by Gini Koch (DAW Books April 2010)
Gini Koch is a pen name of Jeanne Cook
http://eposic.net/blog/archives/196 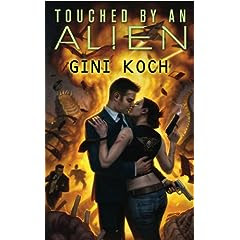 Now look at this still from a movie titled FACE/OFF. 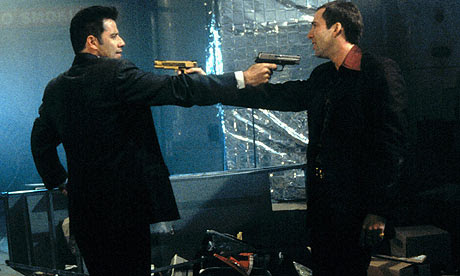 Two men stand almost arm's length from each other, each holding a gun out straight into the other's face, faced-off.

I ran across this image in an article referenced on twitter:
http://www.guardian.co.uk/film/2009/may/22/shane-black-12-rounds

The subtitle of the article:
Summer means action at the cinema, so here's Shane Black, the master of the art, giving Sam Delaney a masterclass in thrills

Notice the stance in the FACE/OFF photo - the distance - and how the guns are held. The IMAGE is all, the COMPOSITION carries the theme non-verbally.

Now just ponder and ponder that.

TOUCHED BY AN ALIEN (an excellent novel!) back cover copy reads thusly:

Marketing manager Katherine "Kitty" Katt had just finished a day on jury duty. When she stepped out of the Pueblo Caliente courthouse, all she was thinking about was the work she had to get caught up on. Then her attention was caught by a fight between a couple - a domestic dispute that looked like it was about to turn ugly. But ugly didn't even begin to cover it when the "man" suddenly transformed into a huge, winged monster right out of a grade Z science fiction movie and went on a deadly killing spree. In hindsight, Kitty realized she probably should have panicked and run screaming the way everyone around her was doing. Instead she got mad, searched her purse for a weapon, and, armed with a Mont Blanc pen, sprinted into action to take down the alien.

In the middle of all the screeching and the ensuing chaos, a tall handsome hunk of a guy in an Armani suit suddenly appeared beside her, examined the body, introduced himself as Jeff Martini with "the agency," called out to an Armani-clad colleague to perform crowd control, and then insisted on leading her to a nearby limo to talk to his "boss."

And that was how Kitty's new life among the aliens began ...

TOUCHED BY AN ALIEN delivers as promised, luscious hunk, complex and progressively sexual relationship, cognitive dissonance, and a heroine modeled after "Mrs. King" of "Scarecrow And Mrs. King" the TV show. Solidly crafted writing with the complex backgrounding handled with a minimum of expository lumping. Highly recommended.

But not recommended just as a good read. This is a book that explains a lot about what's going on in this real world of publishing.

Notice this "science so advanced it seems like magic" novel is published by DAW as Science Fiction, not fantasy - and is styled with all the relationship and sexuality you see in modern Paranormal Romance. The science is only science because we are told it is science not magic, but there are strong "magical" elements there too.

Think of the writing styling emerging from the cross-genre trends, especially hybrid-Romance styles, and now holding those images in mind, let's look at the entire field from the point of view of a literary agent.

There's a wonderful blog I've been following for some time by a really good agent who also seems to be a very good hearted person (not an odd combination among agents, mind you, but Rachelle Gardner here is an excellent example of that hybrid combination. Just read some of her other blog entries to see that.)

I found the following blog entry where Rachelle presents a query from a new author seeking representation that grabbed her attention and prompted her to ask to see the manuscript.

I read the query and the 30 or so responses already posted with great attention, noting it was fraught with passive verbs and passive sentence constructs indicating passive plotting or wrong choice of POV character that would disqualify it from consideration as a screenplay pitch, or as a novel query in SF or Fantasy genres.

I thought about the two iconic images posted above, and about TOUCHED BY AN ALIEN, and about everything marketers, book publicists, agents, editors and most of all film producers have gone to such great lengths to teach me about how to project professionalism into concise pitches.

TOUCHED BY AN ALIEN is almost the same novel as the one described in this query Rachelle Gardner posted, except for Kitt's attitude, which is anything but passive. Kitt is not "drawn into" this conflict; she plunges into it bare-fisted!

Note the only passive construction in the back cover copy of TOUCHED BY AN ALIEN is "her attention was caught." I would have rewritten that to "when she saw" and would have tweaked a lot of the other wording in that copy to sharpen it according to the rules another literary agent, Kristen Nelson illustrated with Linnea Sinclair's back cover copy at Denvention III:

But the TOUCHED BY AN ALIEN cover copy gets the point across about this very interesting woman, Kitty, a MANAGER heading toward the peak of her formidable career, who reacts out of the core of her personality to take charge and exercise her innate sense of responsibility and thereby plunges herself into a whole new reality and a new life.

That "reacts out of the core" and "plunges into" phrasing comes from Blake Snyder's SAVE THE CAT! series which explains why these attitudes are required in a POV character and this construction is an absolute requirement for a feature film screenplay.

I thought about all the kick-ass heroines leading the charge in Paranormal Romance acceptability to the general audiences and especially about the size of the world-audience for AVATAR.

One of the signatures of the Fantasy-SF-kick-ass-heroine novel is that the male and female leads have to be equals, whether they both know it or not. Very often the conflict is about establishing that equality as a prerequisite for a blazing-hot-romance.

If they are not equals, then any sexual relationship smacks of abuse to some (not all) of our modern sensibilities.

Part of our culture has already adopted this icon of equality as the ideal in relationship, and part has rejected it resoundingly. The interesting thing is that sometimes both parts reside in the same reader. The question then becomes, "Are the proportions of these parts that accept or reject equality still changing? If so, in which direction?"

Compare the plot of MR.& MRS. SMITH which starts and ends in a marriage counselor's office with the query chosen by Rachelle Gardner.

We're in the midst of a churning harrowing of our cultural values. The pivot point may have been signified by the film WHAT'S LOVE GOT TO DO WITH IT, the story of Tina Turner's emergence from abused and neglected child to towering icon of the music scene.

Compare that with the film of same title about modernizing the dating game
WHAT'S LOVE GOT TO DO WITH IT (2002)
http://www.imdb.com/title/tt0425645/

Notice the 10 and 20 year intervals and correlate with the generational tastes issues I discussed with respect to Pluto transits:

And now, something new is happening.

I look at that and I see two images of relationship based on equality of power, authority, efficaciousness, fearlessness, self-respect and mutual respect.

What do you see?