In honor of the occasion, I am twittering about the importance of water in fiction. I am also posting an excerpt from Judi Fennell's next merperson book, In Over Her Head. 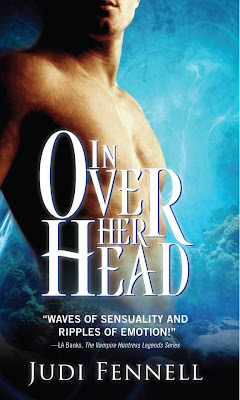 Reel crossed his arms and studied her. "You're taking this a lot better than I thought you would. I didn't know Humans had such open minds."

"Apparently we have lots of neat tricks, us humans. Like breathing water, for instance." Erica sucked in a few pints just for kicks and giggles. She hoped she remembered this hallucination when her body recovered from the bends.

"But I am, ergo, I can." She demonstrated again.

"Well, that's only because I did that to you. To save your life."

"Oh. Right." She choked on that last pint. "Um, to save my life? Well, that's a relief. I had thought that I might be um, well, dead, but then, this certainly isn't my idea of Heaven. So, I'm alive but unconscious? I just have the bends, right? I mean, yes, I'm seeing you as a naked, water-breathing stud-muffin, but you're really just an illusion, aren't you? Maybe a doctor at the hospital some passing boater took me to?"

Reel didn't say anything. He didn't have to. The tittering of the little fish scattered among the whelk art answered for him.

"Erica, I think you better rest on the bottom."

"Why?" She did as he suggested, but put her hands up as he floated toward her. He had to be a figment of her imagination. He had to.

"Sweetheart, you've been out for a few days and you're not in a hospital. You can't have the bends because you never went up to the surface. Chum reminded me about them, actually. So I did the only thing I could."

His face was grave, which, considering the situation, might not be an appropriate analogy, but then, what was appropriate when facing the impossible?

"Turned me?" Somehow, that phrase did not offer comfort.

"Yes. Into a water-breather." He crossed his arms, which flared some really nice pecs that tapered down to slim hips and--

"A fish? You turned me into a fish?" Forget the pecs. And other parts.

"Not a fish. Do you see any fins? Gills? You're not even a Mer. I just gave you the ability to breathe underwater. Otherwise, you would've drowned. And Vincent would've had the right to, well, eat you. I couldn't let that happen."

"Of course you couldn't." Well, see? That made sense. "And Vincent was the, um, shark?"

"That's right." The faintest glimmer of pearly whites showed between his lips.

"And he wanted me for dinner."

"So you somehow managed to re-route my entire oxygenation system and voila! Here I am at the bottom of the sea."

"I'm going to be sick." She turned her face to the side and felt her insides heave.

But then the floor blinked at her.

"What the hell was that?" she screamed, crab-walking backward.

"Flounder. They like to hang out in here since no predators are allowed."

She put a hand on her chest, her heart beating three times as fast as normal. Or was that now normal with her newly-acquired aqua lungs? "Well there's a relief. So I won't have to worry about my body being torn apart by Vincent or others like him? Good to know. Now if I could only guarantee my mind won't fall apart, I'll be just fine."


To find out more about Judi Fennell check out her website:
http://www.judifennell.com
Posted by Rowena Cherry at 10:32 AM