"Mummy, I don't need an anus, do I?"
"Everyone needs an anus," I shot back with my usual practical earthiness, my mind half on the meal I was improvising at the time.

My daughter rocked with laughter. Meanwhile, mindful of certain TV ads encouraging parents to respond appropriately to potentially embarrassing discussions with young teenagers, I glanced across the room to see what might have prompted this question.

"Which star sign is ruled by their anus?" I inquired in my most academic voice.

At first glance, the most likely suspect seemed to be Sagittarius, who is ruled by his or her legs, hips, and also --most likely-- the buttocks.

However, after some collegial debate, we agreed that it's much more probably the hapless Virgo. As if Virgoans didn't have enough to live down! They are ruled by their intestines.

My daughter drew a diagram. As you may see. 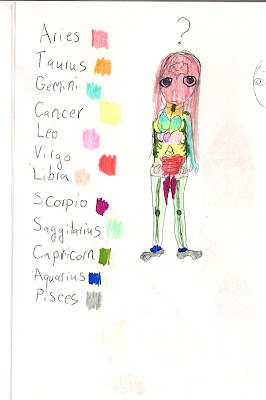 I feel I ought to explain about Scorpio and the inner thigh region. Scorpios are allegedly ruled by their sex organs. It seemed right to my daughter to depict them as strong pink and resembling a male distribution of pubic hair. She isn't as good as Stephen Biesty at drawing cross sections of the human body. Therefore, although she managed a transparent belly and pile of guts, and a very small brain looking more like a furrowed Klingon brow, she was reluctant to draw body openings.

Geminis, for those who wish to know, are ruled by their hands and arms, and also their lungs. Aquarius only has to worry about their ankles. Pisces are slaves to their feet...

The odd thing is, I know people who prove these theories.

Margaret mentioned evolution a couple of weeks ago, and --I read Discover Magazine, too-- there is a theory that we are evolving faster than ever, and in divergent directions.

I wonder. I'm sure it has been done. What would happen if we grouped ourselves according to our star signs? The dating charts seem to suggest that Geminis get along very well with other Geminis, and so forth. It could be an evolutionary problem. Or a strength.

FWIW, in my family, generations of Geminis have always managed to get along very well with Virgoans.