"Start with the sun," is great world-building advice. I think Jacqueline Lichtenberg told me that.

I'd like to say that my reaction was, "Oh, deadly wicked! A short cut!!!" but it wasn't. I'm not that quick on the draw.

I like to think that I'd start with a Big Bang or some equally scientifically plausible explanation for the galaxy or universe in which that star came into being, but it's inevitable that someone, somewhere has already had every thought imaginable. Including every permutation of "which came first: the egg, or the egg-layer?"

Terry Pratchett's Discworld reminds me of a Hindu story, which has been referenced by various great philosophers including John Locke, Hawking, spaceturtle.com, and Russell (not in that order!)

I studied Philosophy at Cambridge (flimsily, along with Sociology and Psychology as part of my combined Honours Education degree). I remember reading Russell's 1927 lecture Why I Am Not a Christian. In it, while discounting the First Cause argument intended to be a proof of God's existence, Russell comments:

“If everything must have a cause, then God must have a cause. If there can be anything without a cause, it may just as well be the world as God, so that there cannot be any validity in that argument. It is exactly of the same nature as the Hindu's view, that the world rested upon an elephant and the elephant rested upon a tortoise; and when they said, "How about the tortoise?" the Indian said, "Suppose we change the subject."

Elephants and tortoises and turtles don't make much sense to me. Nor do questions about what the tortoise was standing on, because loggerheads and leatherbacks swim.

But, where did the turtle come from? Are there other turtles? Other hitchhiking elephants?

And, if our world is the result of "Intelligent Design", why would an intelligent designer locate something as precious and beautiful as our planet (and everything on it) in a cosmic bowling alley or petanque terrain?

Was the Permian extinction an unintended consequence? Or deliberate? Were dinosaurs the prototype, but turned out TSTL?

Is our world a marble? A jack? A cush? A boule? 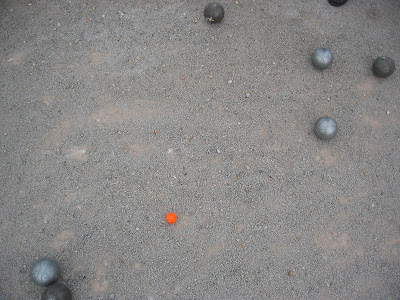 I recently learned to play petanque. There are a lot of games around the world that involve heavy orbs being rolled, bowled, thrown, tossed, or bowled at smaller, brighter spherical objects with the goal of getting as close as possible.

I realize that our star --Sol, the Sun-- is bigger, not smaller, than the planets around it. So the analogy doesn't hold up. Thank goodness. Or should that be, "Thank Goodness!"?

The premise behind The Hitch Hiker's Guide to the Galaxy was fanciful, too. Earth was bulldozed to make way for an intergalactic bypass.

Thinking of intergalactic super highways... a few years ago, the science channel had a fabulous documentary in which they imaginatively visited the eight or nine or ten planets or approximately habitable worlds in our solar system. At the time, we were thought to have nine, but I think Europa and IO were part of the tour. One planet was suggested to have seas of liquid petroleum.

I can imagine. We flew back from the UK over Greenland. Unusually, the cloud cover was sparse, and we could see the lakes and rivers between the mountains. The sun was low, and all the bodies of water looked orange. It was an incredible sight.

In the grander scale of things, I don't think any one school of thought or belief necessarily rules out any other.

Anyway, we write fiction. What makes a good story doesn't have to be what we believe, or limited to that of which we have empirical, demonstrable knowledge.


And... for intelligent design of another sort entirely, here's how to design a killer press release

Posted by Rowena Cherry at 9:49 AM