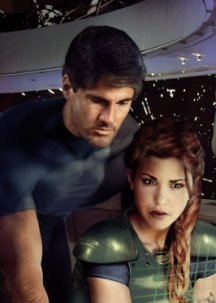 First of all--and a bit off topic--I've been asked how I pronounce my character's name: Chasidah. To me, it's cha-SEE-dah. Or chaz-SEE-dah. Hence, Chaz...

How you want to pronounce it is up to you.

Anyway, now that we have that settled, I want to talk more about the character of Chaz Bergren--Captain Chasidah Bergren--than just her name.

I don't use archetypes when I create characters. I've been asked that, too, but honestly, my characters show up in my head and on my computer screen generally far too fleshed out for me to go back and wrestle them into an archetype. I know a lot of authors use them and that's great. If it works for you, super. I don't use archetypes.

But I can't really tell you exactly what I use other than this nebulous thing call "gut feeling".

Essentially--like an actor--I put on my character's skin. I become that character when I write.

So let's talk about Chaz because she's one of my characters to date that gets the most mixed reviews. People either love her or shrug at her with distinterest.

The negatives I've seen are that people can't empathize with her because she's too military, too strong. I understand that. But she is military. And she is a strong person. You don't get command of a patrol ship, you don't work the big wide darkness as she does and not be strong.

But having strength doesn't mean she doesn't experience hurt. She's just the kind of person that when something hurts her, she doesn't fold. She punches back.

She's also overly analytical. Deliberately. It's part of her military upbringing--she's not only in the military but came from a military family--and it's also her defense mechanism. As long as I'm analyzing the issue, I don't yet have to commit to a solution. That's how she thinks. If she can't punch, she analyzes.

That's how she handles the stuff Sully throws at her, chapter by chapter, in Gabriel's Ghost. Gather, redact, then react.

I liked it about her, too.

Does she over-analyze? Oh, definitely. But she' s not perfect. She has flaws--huge ones. I wouldn't like Chaz as much as I do if she didn't have these flaws.

So how did all these elements come together to create Chaz Bergren, outlaw patrol ship captain fighting for her life on the fringes of civilized space?

From a song. I note it in the opening acknowledgment pages of the book, but in case you missed it and have loaned out your copy, here it is: "Put Your Lights On" by Everlast, from Santana's Supernatural album (1999 Arista Records). If you get a chance, go find the MP3 and listen to it while you read, or reread, a chapter or three of Gabriel's Ghost:

Hey now, all you children
Leave your lights on
You better leave your lights on
'Cause there's a monster
Livin' under my bed
Whisperin' in my ear
And there's an angel
With her hand on my head
She say I got nothing to fear
There's a darkness
Livin' deep in my soul
Still got a purpose to serve
So let your light shine
Deep into my hole

And God don't let me loose my nerve...

It's really Sully's song to her. But when you hear it, when you really feel it, maybe you'll understand her a little bit better. I know it spoke volumes to me and defined not only Chaz, not only Sully, but the essence of the entire book, Gabriel's Ghost. Which--as many of you know--isn't a ghost story at all. But something quite different.

Posted by Linnea Sinclair at 10:04 AM