I have fond, and gripping, memories of the first Cal Leandros novel, Nightlife, published in 2006, and picked up most of the others along the way. 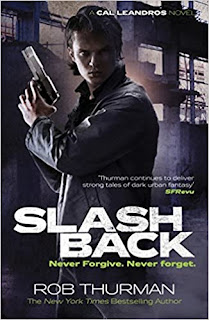 There are 10 extant in this series, and an 11th that apparently was never published (see Goodreads and Facebook).

The 8th in the series is Slashback.

The books use the dual point of view that has been so well developed by the Romance writers and works so very well in Science Fiction -- two characters in a relationship experiencing the same things at the same time, but seeing it all from a different point of view with different priorities.

Cal Leandros is one of the brothers, and his brother is Nikos Leandros.

Their problem is that they live in an Urban Fantasy world where Cal was deliberately conceived and birthed by a drunken, wasted mother who wanted a half-monster child for reasons of her own.

She barely raises them.  Nikos, a child himself, raises Cal as best he can with the ethics learned in Martial Arts.  He focuses on martial arts because monsters are out to kill Cal (and Nikos, too), or maybe worse.

So they live in the everyday normal world, but are stalked, haunted, and attacked by monsters from another dimension.

These skirmishes shape their budding character and morals, where their absentee mother does not.

By 8th novel in the series, Cal is a grown man mastering the monster-powers imbued in his genes by his absent father.

Here, they confront and vanquish a demon that has been after them for basically all their lives.

It is gritty, face-the-ugliness-of-life, Urban Fantasy, but it details the maturation of a fascinating Character, Cal Leandros.

What makes him fascinating in a way Paranormal or Science Fiction Romance writers can use?  It's his personal journey of self-discovery, of delving into the ugly-monster side, finding "powers" he can use and maybe bend to the service of Good.

Does he want to live a life of doing Good?

With his older brother as role model, it's a good bet he will.

What's missing from this series of novels?

Love is there aplenty - love of an older brother for his younger brother abandoned by his mother.

And Cal loves his older brother right back.

But Cal isn't going to make it in this world -- nor will Niko -- without their Soul Mates.  They both need Romance to ignite the spark of Love that Conquers All.

Study this series of novels and consider creating mature Characters with somewhat of a similar background, then designing their Soul Mates, and showing how that diverts them into the path of a life of Happily Ever After, children, pets, community, fulfillment in career and aspirations.

These novels are backstory for one of the hottest Romance setups in Fantasy or Science Fiction -- the half-breed, displaced person.  It's classic.

This series might have gone 25 novels and taken us well into the HEA of both brothers, but the author, Rob Thurman, apparently suffered an accident (found a mention of that on her Facebook wall), and somehow dropped out of social media.  Her Amazon page hasn't been updated, and her Goodreads line shows Book 11 was in progress but never (yet) published.

To visualize what the brothers' HEAs might be like, watch the TV Series on Netflix, Madame Secretary which we discussed here in October.

Madame Secretary details the personal married life of two former spies now working for the Federal Government.  It details the goings-on of only one family.

Suppose you take the two brothers, marry them off to real Soul Mates, fast forward to 4 or 6 children each, and see how they are "now" making a living and coping with children, some of whom are part-monster, and some quite ordinary humans?

Fast forward to a team of these cousins going into business together - say as mercenaries in the ongoing international and inter dimensional wars.

Take those characters and their Elders, all solidly in the HEA portion of their lives, and hurl them into the affairs of wizards.

Read these older series, and use the worlds and life-patterns you see in them as the backstory for another, wholly original, new universe you build.

Build your worlds to teach your wayward characters their life-lessons - how to be a better person, a person like Cal's brother, Niko.