The Vampire as Alien

I'm thrilled that my nonfiction book DIFFERENT BLOOD: THE VAMPIRE AS ALIEN is back on the market at last. It's been re-released by a new publisher with some updating and a fantastic new cover:

This is a work of critical analysis that surveys the widely varied forms of the "vampire as alien" trope in fiction from the second half of the nineteenth century to the early twenty-first. By "alien," I mean a naturally evolved creature (regardless of whether earthly or extraterrestrial) rather than a supernatural undead entity. So DIFFERENT BLOOD examines one subset of the science-fiction vampire. Readers may be surprised to discover how many amazing stories and novels fall into that category. 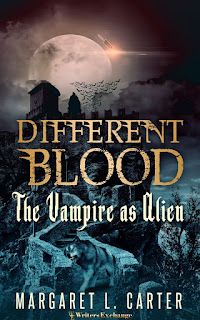 In the Amazon "Look Inside" feature, you can read the introduction and part of Chapter One to get a sense of the flavor of the text. I've drawn upon Jacqueline Lichtenberg's essays such as "Vampire with Muddy Boots" and her article on Intimate Adventure to set the stage for my treatment of the topic. You'll find references to those essays in the introduction. To borrow Jacqueline's terms, I'm fascinated by the way most "vampire as alien" fiction deals with nonhuman characters in an SF framework instead of portraying them as "the Unknown that is a menace because it's a menace."

Naturally, Jacqueline's THOSE OF MY BLOOD is one of the books discussed, as well as HOUSE OF ZEOR and the philosophy underlying the Sime-Gen series. One delightful aspect of writing DIFFERENT BLOOD was having a chance to highlight lots of my favorite novels and stories that develop the figure of the vampire in original, provocative ways. I've always admired the way the vampire, as the most versatile of all the traditional monsters, can be used to explore gender, race, ecological responsibility, predator-prey dynamics, symbiosis, and many other themes; the concept of "alienness" is ideally suited for this exploration. I hope DIFFERENT BLOOD introduces readers to numerous works of exciting, innovative fiction they haven't encountered before.