From the Dark Places

I'm thrilled to announce that my horror novel with romantic elements FROM THE DARK PLACES has been re-released. It's one of my books originally published by Amber Quill Press, which closed in 2016.

From the Dark Places

The title comes from a verse in the Psalms, "The dark places of the land are haunts of violence." The inspirations for this story include H. P. Lovecraft, Madeleine L'Engle's A WRINKLE IN TIME and its sequels, C. S. Lewis's THAT HIDEOUS STRENGTH, and Dennis Wheatley's occult novels about heroes battling satanic cults. Does that mean any fans of one of those authors would like this novel? My best guess is—not necessarily. 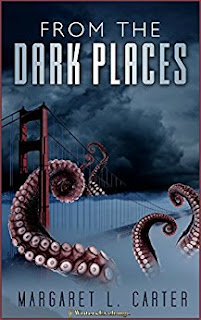 I'm reminded of a remark about friendship in one of Peg Bracken's books (I think): "People are friends in spots." Just because you have something in common with one friend and other things in common with another doesn't guarantee that those two people will hit it off together. Likewise, I've often been surprised with the result when I've recommended a book to a fellow reader who I thought would love it. Different readers like the same book for different reasons. The fact that the other person and I share a mutual passion for a certain book or author doesn't mean he or she will love another work I think has the same appeal. For example, many fans of S. M. Stirling enjoy his fiction for (among other elements) the meticulously and vividly rendered battle scenes, which I skim over. In his "Emberverse" series, which begins with the collapse of civilization in DIES THE FIRE (when all advanced technology stops working permanently), I love the characters, the worldbuilding, and the gradual rebirth of magic as the gods turn out to be real (although what, exactly, the "gods" are is not immediately clear) and many societies that arise after the catastrophe model themselves on such templates as the feudal system of medieval Europe or Celtic, Norse, or Native American myths and cultural memes. Some subscribers to the Stirling Yahoo list, on the other hand, have mentioned that they have little interest in the medievalist and pagan revival material; they'd be just as happy if the series didn't include that stuff at all. The latest installment, set mainly in southeast Asia, includes a Korea ruled by dark forces with a quasi-Lovecraftian vibe. I reveled in that; some fans seemed to find it an unwelcome distraction from what they mainly look for in those novels. Anyone trying to recommend books on the basis of "if you like DIES THE FIRE, you'll like [blank]" would have to suggest entirely different works to me and those other fans. Similarly, if a reader told me she liked vampires, I'd have to ask, "What kind, and what do you like about them?" before I could recommend a reading list or guess how she'd feel about my vampires.

So—if you enjoy occult thrillers about conflicts between cosmic good and evil with a Christian slant but not heavily "inspirational," you might like FROM THE DARK PLACES. Especially if a northern California setting appeals to you. Some fans of Lovecraft's mythos might enjoy this book, while others might dislike it as "Lovecraft light" because it doesn't embrace his view of the universe as a vast, meaningless void of matter and energy in flux, indifferent to humanity. People make friends with books "in spots," too.