The idea for my latest release, Blow by Blow, formed while I was plotting a book about the vigilante who appears in this novel. The vigilante's story was originally going to be a science fiction romance, but as I worked on the outline for Blow by Blow, I decided that a futuristic setting would be better for both stories.

Setting the book on a planet that is radically different from Earth might distance us too much from some of the issues encountered by the characters. Rather than ask readers to completely suspend their disbelief, my goal is to make them feel like the events of the story could happen or, in some cases, are happening in the world we live in.

To me, that's the main benefit of writing a book set on an alternate Earth. It resembles our world, therefore the characters' actions, traits and surroundings are similar to our own. It's also in some ways easier to write in this setting than to create a world with a completely different environment and alien cultures. This benefit, however, is related to what I believe is the main challenge of writing in a futuristic setting.

If there are no noticeable differences between the world in the book and our world, then it would be more sensible to make the story a contemporary romance. In Blow by Blow, I renamed major places. All the rules and laws of the fictional world are not always identical to those on our Earth. The biggest change is the second civil war that happened in the States. The challenge is to include enough differences to show readers that it's not the world as we know it, but it could be.

Readers, how do you feel about stories set on an alternate Earth? Authors, what do you feel are the major challenges and benefits of writing a book using this setting? 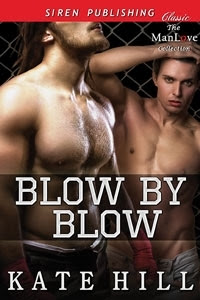 A hunky former heavyweight champ and an ass-kicking beauty fight for their lives and their love in a futuristic world of MMA.

Theo "Little Raven" Fisker, is a bantamweight with attitude who plans to make a name for himself in the Radical Warrior Tournament, a prestigious mixed martial arts event. The problem is no team will sign a male fighter who walks out in silver and pink with nail polish to match, until he meets Master Jesse.

Impressed by Theo's talent, Jesse welcomes him onto his up and coming team. Fists and sparks fly when Theo meets gorgeous Valentin Merrickson. Theo draws Valentin out of his protective armor and sparks hope for a life the tough heavyweight never imagined possible. Their love grows, but threats from extremists and an injury that ends Valentin's career in the cage might tear them apart.

Theo turned to him, his gaze sweeping him from head to toe, and said, "I'm not so sure about that, Sunshine."

Valentin's expression turned stony. "Why do you keep calling me that?"

"Because just looking at you is enough to brighten anyone's day." The words left Theo's mouth before he could stop them. That had always been one of his biggest problems. A thought popped into his head and he had to say it. He rarely considered the consequences.

"Ohhh." Liz smiled and glanced at Valentin. "Now that's a line I need to remember."

"Should you be drinking while you're training?" Theo asked. "We have a tournament coming up at the end of the month."

"It's water with lemon in it, not that it's any of your business," Valentin said, but his faint smile belied his rude tone.

"Just thinking about the team," Theo said, deliberately using a flirty look. He removed his apron with the words Panoramic View embroidered across it in silver and embellished with a black skull.

Theo glanced toward Liz, who stood at the other end of the bar. He wasn't sure how his new boss would feel if she knew the dual uses of his attire. He probably shouldn't even admit this to Valentin, but he said softly, "It is. My father was an artist--a martial artist--and he made jewelry as a hobby. He liked finding ways of making weapons fashionable." Theo gestured toward his belt.

"What else does he make?"

"He's dead," Theo said quietly. Though his father had been dead for years, thinking about his loss still hurt.

"I'm sorry," Valentin said. "That belt must be pretty special to you."

"It is." Theo sighed. "I really need to catch the bus and get to sleep."

"Not yet, but I'm working on it. I used a rental to drive here, but I returned it yesterday."

"Didn't you just get here?"

Valentin shrugged. "I'm done with my drink and I'm in training, too. Ready to go?"

"Right here." Liz, who had approached, picked up his black bag from behind the counter and handed it to him.

Theo took it from her.

From the corner of his eye, he noticed a news headline on the widescreen TV above the bar.

"Hey, Liz," said one of the waitresses, stepping behind the bar to turn up the volume. "The Spellman Hill Vigilante strikes again."

Theo listened to a brief report about two guys who had been knocked unconscious by a helmeted figure while attempting to mug a woman on her way home from work the previous night.

"Yeah. Over the past year or so a guy in a black helmet has been on the streets stopping crime in and around Spellman Hill. He seems to focus on crimes against the gay community, but not always," said the waitress. "A few of his victims claim he attacked them at random, but I'm not so sure. Cops don't like him for obvious reasons, but I feel a little safer knowing he's around."

"I wish the news would stop sensationalizing this guy," Liz said, shaking her head.

Liz raised her eyes to heaven. "Just as long as he doesn't try to be a 'hero' near my club. If you ask me he's just a wacko."

After saying good night, Theo and Valentin walked out of the club together. Valentin was more than a head taller than Theo, so even with his high-heeled black boots Theo needed to look up to him. He kind of liked it. Hell, he loved it.

Outside they climbed into Valentin's sleek black sports car. It probably cost more than Theo had made fighting over the past couple of years. Still Valentin could probably afford it with little stress. He'd done well in his career and Theo had read several articles in sports magazines that mentioned Valentin's wise business investments.

Smiling, Theo stretched his long legs and leaned back in the leather seat. "I could get used to this."

"I know what you mean," Valentin said under his breath. His blue gaze lingered on Theo's legs and crotch.

"Are you flirting with me, Sunshine?"

"Why not? You've been doing it all day."

Blow by Blow
Posted by Margaret Carter at 8:00 AM