Alyce, the heroine of "Song from the Abyss," inherits a house that belonged to her eccentric aunt. It turns out the house contains a portal to another dimension. By playing a CD of eerie music, Alyce accidentally opens the portal and summons back to our world her boyfriend who vanished when they were both eighteen. H. P. Lovecraft's "The Dunwich Horror" partly inspired the hero, who's not entirely human—and has tentacles. 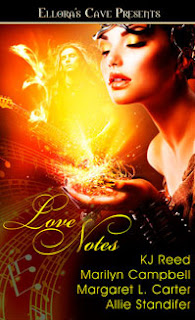 This story is also available in a print anthology, EVEN NAUGHTIER NUPTIALS:

As would be obvious from these stories and my Amber Quill Press novels FROM THE DARK PLACES (horror with Christian elements) and WINDWALKER'S MATE (paranormal romance), I'm a big fan of Lovecraft's tropes—ancient family secrets, forbidden tomes, and mind-shattering invaders from other dimensions—but not at all in sympathy with his worldview.