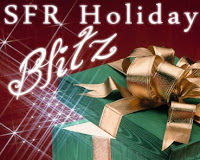 I’m Marcella Burnard and as part of the Holiday Blitz over at The Galaxy Express, I’m stepping in to bribe you into giving up your 2010 top pick SFR reads. No taking without giving, however!

Below you’ll find my 2010 reading list and the few books I consider the top options. When I ran through my list, I realized the number of books I’d read was pathetic. I’ll attribute it to the fact that I was desperately trying to get my own book finished and to the editor in something resembling a timely fashion. E-books are noticeably absent from my reading list. There’s not a one. Yes. Even though I claim to be a geek, I resisted buying into the e-reader market because I wanted access to loads and loads of nonfiction science books. The first e-reader incarnations didn’t have much of a nonfiction list. That’s changed and I did finally buy a Kindle recently. Granted, I have yet to download a single book – danged deadlines.

The real shocker? There are exactly three actual scifi romance novels on my list. Maybe four. Depends on how you classify Steampunk. I hope that doesn’t mean I have to turn in my SFR fangirl card…

Turns out, I’m one of those authors who cannot read in my genre while working on a book of my own. It’s too easy for me to pick up someone else’s voice. If I read scifi romance while I’m writing, I end up sounding like whoever I’m reading. So I read books outside the genre. That’s where the nonfiction books, the thriller, and the urban fantasy stories come in. Of those, I can enthusiastically recommend Laura Bickle’s book, Sparks. Of the nonfiction, my favorite was Extreme Fear: The Science of Your Mind in Danger by Jeff Wise.

A friend loaned my husband her copy of Old Man’s War by John Scalzi. I saw the book, spotted “Hugo Award Winner” emblazoned on the front and, curious as to what sort of stories the Science Fiction and Fantasy Writers of America thought were the best examples of the genre, I picked up the book to read the back cover copy. Several hours later, I’d finished reading the book. It was that good. I began wondering if I could read my way through the complete list of Hugo winners. It seemed like the sort of thing a fledgling science fiction writer ought to do – learn from the award winners. Scalzi’s book was definitely my favorite of the three I read this year. Roger Zelazny’s book, Lord of Light, was fascinating and compelling. It didn’t feel at all like a science fiction novel – no one ever talked about the science. Yet the story being told wasn’t possible without the technology placed in the background of the world. I read the book, closed it, blinked, and shook my head. No way could I have conceived of that story, much less written anything like it. But I certainly could (and did) enjoy it.

This brings us around to the steampunk and SFR novels I managed to consume in the latter half of the year. (After I’d turned in book two of my SFR series and before the first book, Enemy Within, hit shelves in early November.) Soulless by Gail Carrington was a fun read. The book qualifies more as paranormal than as science fiction, in my opinion, because what science is present isn’t integral to the story. The paranormal elements are stronger – vampires, werewolves and zombies, oh my. I’d even argue that the book is set in a steampunk-like world, but that the book is a comedy of manners more than anything – a *very* good comedy of manners, mind you, but if you prefer to read SFR and SFR only, this one won’t do. The Iron Duke by Meljean Brook, on the other hand, is very much an alternate history science fiction romance story and a pretty spectacular one, at that. The world has been thought through in detail. The blend of science and adventure is a kick. It’s another I strongly recommend. Touched by an Alien by Gini Koch was another fast, fun read. The only caution I issue is that if you object to religion in your fiction, this book may annoy you. I found it relatively unobtrusive and the humor showed through it all, but I have run into a few readers who stumbled on that one point. Jayne Castle’s book, After Dark, while technically a futuristic romance, read more like a paranormal to me. Sure, it’s another planet and the species is adapting in strange ways to living on this world, but science was light on the ground in this story. (I should mention, too, that this book was published some years ago in 2000 – I just happened to have picked it up and read it this year when someone put it on the book trading shelf at the marina where we live.) This brings us around to one of my all time favorite authors: Linnea Sinclair and her book Rebels and Lovers. First, can I say I love the cover of that book? A geek hero in glasses? This book was definitely another of my favorites.

What about you? What did you read this year that stands out? After all, I have to build a reading list for 2011 and I don’t want to miss out.

I have two signed copies of Enemy Within to give away.

Leave your favorite reads of 2010 in comments and on 12/21, I’ll draw names and ask your lovely Alien Romance hostesses to post the winners!

*****
Owning up from Rowena Cherry.
If there are any errors with the links, the blame is mine. I had a bit of fun looking up the authors and the books that Marcella mentioned, and discovered some exceptionally cool stuff.

I also avoided providing a buy-the-book link to Amazon, if another one made more sense to me.... for instance if no one has posted a review on Powells, or Barnes and Noble. Or if the Google book site seemed cooler.

Rowena
PS  Via Love Romance Passion in connection with the global SFR Holiday Blitz, Rowena Cherry is giving away one mailer containing one print copy each of Insufficient Mating Material and Knight's Fork . The one winner chosen by Love Romance Passion can be anywhere in the world.

REBELS AND LOVERS will go to one winner on the Geek Mom blog
Gini Koch's TOUCHED BY AN ALIEN will go to the winner on : Lisa Paitz Spindler's Blog
Posted by Rowena Cherry at 2:03 AM