I'm definitely shooting from the hip this morning, so please forgive me. I've had an incredibly exciting flurry of activity, and I'd like to share a glimpse.

It's probably no secret that I am a bit of a copyright hawk. In fact, I'm engaged in a debate with a self-avowed pirate named Jap on Richard Curtis's blog at the moment.... but that's not what I wish to discuss today, and that's not where the URL in the title goes.

I've just contracted to license some new cover art and backgrounds from Mitchel Gray, and if anyone is looking for some terrific images at realistic prices to use on covers (much of the Royalty Free stuff is for non-commercial use) you should at least take a look at Mitchel's work, and follow him on Facebook. 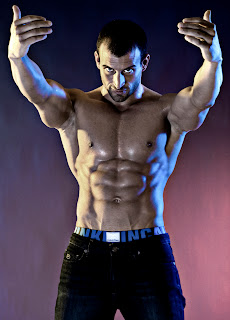 This image is copyrighted by Mitchel Gray.

If you have read my books, who do you think this is? (Or could be?)

My first reaction to this amazing image was that I love the colors and the lighting but the guy does not look like a hero. He looks rather sinister.

Overnight, it came to me. His armpits are shaven. His head should be shaven, too. If I construct a war-hand, and remove his trousers, this could be Viz-Igerd!

He likes sex doggy-style. I think it was the position of this gentleman's hands that caught my imagination, although that gesture is also classically Wizard, and a fighter's come-on.

Call it serendipity, but sometimes, for me, a new story doesn't really fall into place until I have something --someone, I should say-- to look at.

My friend, Mia Marlowe, likes to create a soundtrack of mood music for her heroes. I prefer visuals. To some extent, I do know what music my heroes like... I haven't got that far with His Potency, Viz-Igerd, the Gravenclaw, yet.

Is cover art important to you? It's critical for me. The cover has to show someone or something that is in the book, and it has to be accurate. I'm struggling with new covers for Insufficient Mating Material, and an improved cover for Knight's Fork. It's a busy time! 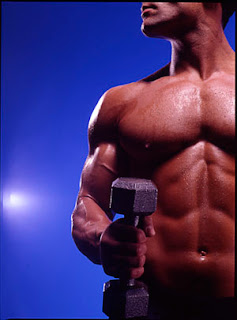 My next struggle is to decide whether it would be cool to use the same cover hunk (I have to negotiate a contract for each new use) for each book in the series, but with a different background and a different chess piece in his fisted grip.

In the case of Mating Net, the King is an obvious choice, because the protagonist seized a kingdom. Well, an Empire.

My Facebook correspondents, by and large, opine that the Djetth character on the deserted tropical island ought to be holding a knife.
Since he is the victim of a shotgun wedding to a political pawn, he could equally well be squeezing the neck of a bishop, or holding a pawn.

Goddessfish.com is working on something for me right now, as I need to get any cover into the Realms Of Fantasy ad copy and today is the deadline set by the iwofa group.