Welcome Rowena Cherry, whose heroes are larger than life in every way.
Amber: Why do you write fantasy?
Rowena: I write Fantasy because... I want my heroes to be larger than life in every way. The "god-Princes of Tigron" are over seven feet tall, have seven shark-like senses and genie-like powers, all are physically attractive and highly sexed, they're wealthy and powerful and intelligent and courageous and supremely competent... and royal. And faithful.

You cannot find a series-worth of heroes in any other genre (other than Fantasy) without seriously messing with real History and/or Geography, or at the least, grafting a branch that does not belong onto British Lord's family tree. Therefore, I set my self-styled, high-tech "gods" in outer space. 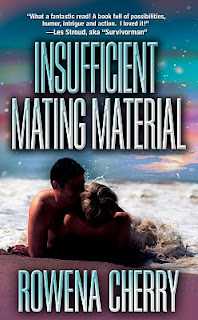 A few examples of things I've researched include: whether or not a woman can really shave her legs with a "razor" shell (she cannot, and I had hairy scabs on my legs to prove it); what forms have to be filled out in Britain before a grave can be exhumed and the remains exported (if a loved one is buried on Church grounds, exhumation is much less likely to be permitted); under what circumstances a Magnum (gun) might jam; the top five ways that able-bodied people unintentionally offend people who are confined to wheelchairs; and the physics and chemistry that would have to be in place for a sky to turn green.

Strictly speaking, my novels are all classified by the publisher as "futuristic romance" but readers have termed them everything from fantasy to paranormal to sfr (science fiction romance). The trouble with "futuristic" is that many readers expect futuristics to be set "in the future", but romances fall into the "futuristic" category if space travel --involving spacecraft-- and/or more technologically advanced alien societies are central to the story.
Just because I claim to write Fantasy does not mean that I make everything up. I believe there is a limit to how far a reader should have to suspend disbelief. It seems only polite and responsible to give my readers a reason to trust me, therefore, if something can be researched, then I research it.
Here's a dilemma for a futuristic series writer. What happens if one book in a "futuristic" series has no scenes featuring advanced technology and spacecraft? It never occurred to me that this could be perceived as an outrage by review-writing readers until I read a chance remark on a GoodReads.com discussion.

If I had known, I should still have written Insufficient Mating Material pretty much the way it is. Would I have taken a critical scene and relocated it on a spaceship? I honestly don't know. If my editor had requested it, perhaps so. I can be flexible. At the eleventh hour, when I saw the cover art for Insufficient Mating Material, I decided that I had to take apart one third of the novel and re-work it because I believe passionately that what is on the cover should be an illustration of a scene in the book.

There was no "From Here To Eternity" scene in the original Insufficient Mating Material, but it was obvious after seeing the cover that there had to be one. An important chess-playing scene had to be removed (the word count was already set), a beach had to be cleared of dead bodies (LOL!!!), and the ending had to change... because the original ending would have been an anti-climax after the new sex in the surf scene. It follows that if the cover artist had illustrated a wonderfully sinister, looming spaceship reminiscent of Independence Day, I should have revised the text to go with it.


Amber: Why do readers love fantasy?
Rowena: I can only answer for myself. I love to read. (Full stop!) I love Fantasy, but I also love Mystery, Suspense, Historicals, History, Anthologies, Cat books, Science Fiction... As far as I am concerned, genre labels are a bit of a nuisance.

There are many aspects of Fantasy that I appreciate very much, particularly dragons and magic (which I don't have), psychic powers (which I do have), and the potential for unusual solutions to universal problems.

What I do not appreciate in Fantasy or any other genre is when the author stretches my credulity too far, or breaks the rules they have established for their own world.


Amber: Would you write fantasy even if no one read it?
Rowena: Hah! Yes, I would, but I'd package and market it as something else. 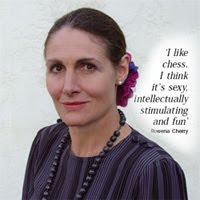 Rowena Cherry has played chess with a Grand Master and former President of the World Chess Federation (hence the chess-pun titles of her alien romances).
She has spent folly filled summers in a Spanish castle; dined on a sheikh's yacht with royalty; been serenaded (on a birthday) by a rockstar and an English nobleman; ridden in a pace car at the 1993 Indy 500; received the gold level of the Duke of Edinburgh's Award; and generally lived on the edge of the sort of life that inspires her romances about high-living alien gods.
Rowena's Mission Statement - My goal as a Romance author is to give good value. I expect to provide my readers with six to eight hours of amusement, a couple of really good laughs, a romantic frisson or two from the sensual scenes, a thoroughly satisfying HEA, and something to think –or talk-- about when the book is finished.
Heroines get more hero than they bargain for....


Rowena's Books
The "god-Princes of Tigron" series (also dubbed "The Mating Books") was basically "three royal weddings and a murder". In the first book, a bad-boy Prince abducted the mate of his dreams who happened to be from the black sheep branch of his royal family. Prince Tarrant-Arragon was so pleased with his stolen bride, and with married life, that he decided to trick or force his two greatest enemies into politically disastrous sexual liaisons with liability wives… in other words, to his own controversial sisters.