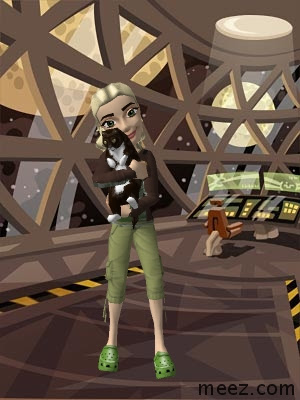 I’ve spent the past two weekends, back-to-back, teaching writing workshops out of town for two different writer groups. (Yes, that is me on the bridge of my starship--the only way to travel these days. And Daq cat agrees.) One Saturday I was in Tampa with the local RWA (Romance Writers of America) chapter. This past weekend I was in Ft Myers with the Gulf Coast Writers Association. One of the neat-o peachy keen things about teaching writing is that it forces me to again study the craft of writing.

Not that that’s something I don’t do a lot. I’m an admitted research junkie (I’m also a word slut but we’ll get to that at another time). I have an unending curiosity of why things work (or don’t). So I have an entire bookshelf devoted to craft of writing tomes.

I used just about every one of them for my last Saturday’s three-hour workshop. (I also quoted a lot of Jacqueline Lichtenberg but then you all know I worship at the Great JL’s feet.)

One of the easiest and yet often overlooked tips I shared was one I found in Browne & King’s Self-Editing for Fiction Writers (a totally excellent book). It’s so simple yet it addresses one of the problems I frequently see in unpublished stories. That problem is an emotion is NAMED rather than SHOWN.

Let me give you an example:
Lois was happy to see Clark at her front door.

WAS HAPPY is not only use of the passive (was) but it’s naming the emotion (ie: telling the reader) rather than showing the emotion in action. And good fiction writing is all about showing (in action) rather than telling (in narrative and in passive voice).

Why is that not good writing? Well, honestly, it’s not bad writing. It’s grammatically correct. It gets the point across. But it’s not engaging writing and it’s not effective writing, and to compete in today’s commercial genre fiction market, you need to be engaging and effective. Writing guru Dwight Swain penned years ago that “it’s the author’s job to manipulate the emotions of the reader.” The lovely Jacqueline Lichtenberg reminds us on her Worldcrafter’s site that “fiction is drama.” Well, it’s rather hard to manipulate emotions and create drama in the passive voice, and without action.

So while Lois was happy to see Clark at her front door, the editor, agent or reader will not be happy reading that sentence. They won’t be feeling Lois’ happiness as much as they could because that kind of sentence doesn’t manipulate reader emotions.

What does? Showing. Action.

So we take “Lois was happy” and we give the reader (and agent and editor who are going to read those lines long before any reader does) the visual. “Vividness outranks brevity,” Swain says.

Lois peeked through the small heart-shaped beveled-glass window set in her front door and her breath caught in delight. Could it be…? Could that actually be…? Yes, it was, it was Clark. She let out a little squeal, a girlish and joyful sound…

Okay, supremely overwritten but I hope you get the idea. Instead of naming the emotion for the reader (happiness), the writer describes the sensations and thoughts and actions that most humans (since we assume humans are your readers) recognize as indications of happiness.

I know. You’re saying, yeah, that’s obvious. But you know what? I bet you dollars to doughnuts that if you go through your current work-in-progress, you’ll find at least three instances where you cheap-out and name an emotion instead of showing it, instead of letting the reader experience it.

I did. And I’m supposed to know what I’m doing.

Obviously, you can overdo this. You don’t detail every emotion every character feels in a story. The story would feel cartoonish. But you should at least be aware of whether or not you’re doing as much as you should in key scenes that have (or should have) a strong emotional element.

By the way, I did a handout (actually, I did about ten handouts) in that class with a SHOW THE EMOTION exercise. And it was interesting (and fun) to see the variations people created from:

Janet was unhappy that Roger walked by her desk without mentioning her birthday.

From sobs to slumping shoulders, from narrow-eyed glares to hurling of iPods, Janet showed her unhappiness (SHOWED) with Roger in an interesting variety of ways. Without ever TELLING the reader that she was unhappy.

Email ThisBlogThis!Share to TwitterShare to FacebookShare to Pinterest
Labels: craft of writing