"Are you a plotter or a pantser?"

If you are a published author, how many times have you been asked that? If you are a reader, do you care whether or not an author is methodical and well organized? If you are a writer who is seeking publication, do you try to change your ways if you see a pattern and all your favorite authors are proud plotters? (Or proud pantsers?)

Or... is the question really code for something else? Does the interviewer really want to know if you write plot-driven, or character-driven stories?

According (I think) to Orson Scott Card, there are four types of stories: event (or plot) focused; character centered; idea based; or about milieu.

No one has ever asked if I write Idea, or Milieu. Among speculative fiction writers, I'd think some of us (but not me) might be more interested in an idea, or in world-building. In my opinion, Lord of the Rings (the book, not the movie) was a Milieu story.

I've digressed from the confines of being "plotter" or "pantser".

This year --I've been honored with a few interview requests-- I've seen a third option both asked, and discussed on writers' loops: that of puzzler.

Given that I'm asked the question, I like to give a thoughtful, unique, and interesting answer. Maybe I don't always succeed, but a monosyllabic response must miss the point of doing an interview, mustn't it?

Until yesterday, I often compared my own writing approach to solving a jigsaw puzzle in which the corners and outline were always in place first, but some of the pieces (including outside pieces) were identical in color and shape on at least two sides so I might not notice they started out in the wrong place until the work was almost completed.

Yesterday I attempted a chess analogy. It actually doesn't work as well as a jigsaw puzzle, unless I think of my editor --or someone else-- as an opponent in the process, which of course, I don't.

I write chess-titled Romances. I have done since 1993. It's ironic that other authors have chess covers, isn't it?

I write character-driven stories, usually centered on the hero. Plot... or a series of thrilling events... isn't my primary interest.

Comparing the beginning of a work to having a chess board before me is interesting (to me). Of course, my editor would never tolerate a cast of thirty-two: 16 good-guys and 16 baddies.

Well, I don't need the sidling Bishops, and I don't need a full complement of pawns on either side, either. Moreover, I can cut down on the Rooks (or castles) and if I think of them as the spaceships and palaces (or milieu, not characters), I'm almost down to a manageable cast.

You might (or might not!) be interested to know why I didn't have time to send Christmas cards last year. My editor needed me to write out a "Castle", an entire spaceship on which a climactic scene took place, and also two "Knights" from Knight's Fork.

She was right, of course.

Each character has its strengths, powers, and limitations. They can only move as far, and in the directions dictated by who/what they are, and what is in their way.

There are rules. Every move has consequences. There's a time limit. There are space constraints. Pawns can be transformed into more powerful pieces.

My fanciful little chess analogy ought to fail on account of the color contrast. In politics, not everyone acts as his party expects. However, I collect chess sets. I have a Cretan set, where Black is Gold and White is Silver. Once the men (chessmen) are rubbed a few times, it's hard to tell which side they're on.

With that happy thought, I'll wish you a safe and happy Labor Day.

By the way, I heard this week that Insufficient Mating Material won the 2008 Hollywood Book Festival's Romance category. 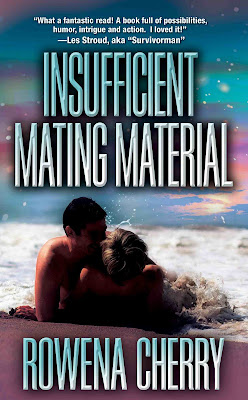 Posted by Rowena Cherry at 6:57 AM