What makes a good interview?

Since this is a craft blog, I'm probably not asking in the right place!

However, I'm wondering whether there is a "one size fits all" interview, or whether interview questions and answers ought to be carefully tailored according to whether the majority of those likely to read the interview are readers who want to know more about the author, and some insider secrets behind the writing of the book, or writers who want to know what works for other writers in the sfr genre.

I've just had the privilege of being interviewed by our Heather of Galaxy Express, who asks the best and most insightful questions ever! Also by Mandy Roth and Michelle Pillow, who ask a mean (in a good way) question or six.

Almost every interviewer, whether for a craft site or a review site, asks which authors I believe have influenced me. My answer to that never changes. Now, I don't mind in the least being asked a question I can answer on autopilot.

However, I cannot help wondering whether readers are interested. If so, why?

Another question which I completely understand for writers' groups and craft blogs is which How-To-Write-Science-Fiction books I recommend. But, do you think readers who are not writers are interested?

How much of a list is appropriate before a bibliography becomes boring?


If I have overlooked some superb resources, please do add other recommendations as Comments, and a brief word why they are tops in your opinion. I'll add them to a Listmania and give commentators credit.


By the way, last evening, I made a Listmania list on Amazon.com because it is so much more fun to show cover art, and I did the same thing with a Top Ten list on Chapters.Indigo.ca

(If anyone takes a look and likes my list or lists, a "Helpful" click would be much appreciated!)

Moreover, if the authors on this list would like to put a "being interviewed tip" in the comments, maybe I could assemble a Listmania with their cover and their tip, and we'd have something helpful and promotional on Amazon etc. 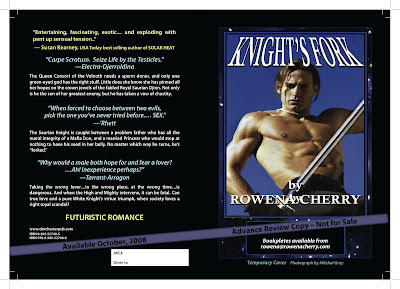 This is the cover of the ARCs for Knight's Fork that I'm doing privately. It's astonishing to me that it is cheaper to put together a POD, than it is to photocopy and spiral bind galleys! Moreover, it's tidier, and a lot more special looking.

For the next few days, there's an ARC being given away to one of the people who comments on the Rowena Cherry Author Feature at:

I believe that I'm also giving away another ARC in one of the contests being run from my newsletter on my website.