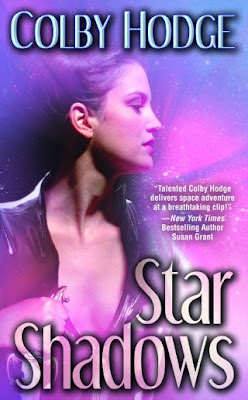 
Three friends living in a dangerous world of paranormal phenomenon and mind-controlling enemies are bound to protect each other at any cost. Arielle and Zander Phoenix and Boone have been friends since they were kids. Arielle and Zander are forbidden to leave their home; neither one of them understands why, while Boone claims the freedom they wish they had by being part of the academy and becoming a fighter pilot who travels the galaxy.

Zander becomes frustrated with his lack of power and wants to experience what his friend has seen in other worlds, so he rebels against his parents' judgment. He steals Boone's ship and takes off into a dangerous world he knows nothing about. The secret that Zander's parents have kept from both him and his sister is coming full circle and will affect them all.

STAR SHADOWS, the third book in this futuristic adventure series, casts a fabulous spell over the reader. Colby Hodge has an uncanny knack of connecting readers to the characters in a way that leaves you crying and laughing right along with them. I am excited to read the other books in this series.
Posted by Cindy Holby at 8:23 AM