Reviews have not been indexed, but you may find most of these posts by searching this blog for keyword Review.

In Reviews 45, we looked at the 14 book series, DESTROYERMEN by Taylor Anderson -- an exercise in the technology of weaponry and strategy and tactics of global warfare.  It has a few engrossing characters, and a couple of solidly developed Relationships -- but the plot has nothing much to do with who these people are or what they think about each other.  Romance fans will find little of interest, and a lot of boring wordage in huge blocks of exposition.

For that very reason, Romance writers need to study why Destroyermen is such a huge Best Seller in its genre.

Military Science Fiction, and alternate Universes, time-travel Science Fiction is an all-time favorite of mine.  But I also thrill to a good Detective novel, Police Procedural, and anti-procedural (the rogue private eye who solves the crime but ruins the court case).

The Private Investigator novel hinges and two elements -- 1) the personality of the PI Character, 2) the intricate puzzle of the Mystery to be solved.

How-done-it; Who-done-it -- every subgenera or mystery is intimately related to Science Fiction in that Science is all about solving the mysteries of existence, how things work, and whether it makes a difference who you are.

Both mystery and Science Fiction are about learning something that will let you understand what is really going on.

Both mystery and Science Fiction are about posing the question in a way that will let you solve the problem, and understand what is happening.

Mystery is about "who-done-it" in that Mystery focuses on a criminal who made something strange happen, and forced the investigator to pose questions to answer.

The TV Series NCIS is an excellent example of detailed Characterization, with characters grouped into a cooperative team, an ensemble TV Series.  Netflix, CBS All Access 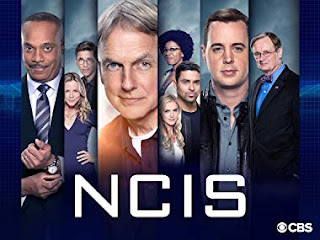 Which Character is the lead character for you, your MC, depends on what you think is important in life in the world.  All the Characters have ever-changing love-interests (or at least sex), but each brings a different expertise to question formulation.

For science fiction romance writers, Abby, the forensics specialist (fantasy character in that she does the work of a wide-array of different specialists), or possibly Ducky, the pathologist.

Finding out what the strange, oddball, components of the clues really are is a big part of unraveling a mystery.  Then the field people have to go talk to, interrogate, and background check the people involved, and then use Emotional Intelligence (in later episodes, Ducky becomes their profiler) to formulate questions about motives.

Watching this series is painless, breezy, and pretty mindless, as they repeat the same mysteries endlessly.  From season to season, they find ways to put each member of the team in jeopardy -- even threatened with being held to account for breaking rules.

Romance Genre is about this exact same mystery-solving process but applied to the Other -- the Love At First Sight, or the Love Hidden In Improbable Person.  Sometimes love surfaces as hate-at-first-sight, and that is a great mystery to solve.

So science, and romance, are warp and woof of the same cloth.  It is all Mystery.

Today, we have the advent of the Cozy Mystery -- revolving around ongoing, intimate relationships (which may or may not be romantic or sexual), with less blood on the floors, violence, threat to life-and-limb, and more inquisitive use of Emotional Intelligence.

To solve the mystery of how a crime was pulled off, a Private Investigator has to use tools that are a) unavailable to law enforcement, and b) available to the average reader of the genre.

In other words, the PI is the MacGyver of the Mystery Genre - the amateur who repurposes everyday tools to make things happen that the reader wants to see happen.

In Romance, the reader wants to see the Couple actually resolve their conflicts and get together as a team.

In Reviews 45, we noted how the Destroyermen novels slide through the gory details of forming improbable alliances among humans and non-humans.  This is the wish-fulfillment fantasy element used "off the nose" to help deliver the payload of WINNING to the military science fiction fan.

Then there is the PI, the Private Eye, who is a loner -- like the soldier of fortune.  Not a team player.  Not facile at forming relationships.  In the TV Series, NCIS, we have our Gunny, Gibbs-the-team-leader who does not want a promotion.  He has the knack of knowing everything, and being where he is needed -- these are the Talents of the Gunnery Sergeant in Military Science Fiction.

A Sergeant is a bright, talented, well schooled enlisted officer -- not a college grad, usually. College grads are commissioned officers.

Gibbs has been married, widowed, and multiply divorced -- he has found a spot in life that suits him fine, but still takes deep interest in women.

So to make the wide, TV audience who loves Procedurals (NCIS has to make court-cases, not just fix things as a Superhero Vigilante might), find NCIS a go-to-favorite, they had to explore and develop the Characters and play each Character for all the possible Relationships in their lives.

Likewise, to create an ongoing, long-series PI Character for a Best Selling Series, you have to take the readership into account.  A TV Series is expensive and thus has to appeal to a broader audience than a book, which is pretty cheap to publish relative to any video presentation.

The Dev Haskell series is par-boiled, not hard-boiled, PI genre.  There is a lot of physical threat, a lot of fist-beatings, shootings, injuries, blood on the floor, gangsters who play for keeps, Crime Bosses to be reckoned with, and a loner PI, Dev Haskell, who shares a hole-in-the-wall office with a down-at-the-heels lawyer.

The Characterization is colorful, but just stereotyped enough to be worth studying for genre structure.

Dev Haskell is an "anthology series" -- like Darkover or Star Trek -- which can be read in any order.  But it's more fun in published order. 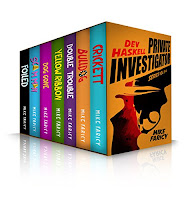 It is also easy to drop into the series without having read books set previously in the timeline.

So to complete the genre study of how the Private Eye genre is converging via Cozy Mystery toward the Science Fiction Romance Genre, download (or free on KindleUnlimited) the boxed set of books 8-14 of Dev Haskell - Private Investigator by Mike Faricy

These are very short novels, each solving a mystery, but getting the PI embroiled in the underworld politics of his city.  In many ways, you will find similarities to Jim Butcher's Dresden Files Series (another favorite of mine!), keeping in mind it was briefly a TV Series, has graphic novels, comics, and many fans.

Note what dimension of reality these very best selling series leave out -- solve the mystery of why Romance is left OUT of these very best, best sellers, why the Characters bounce randomly from relationship to relationship.  It's a mystery.  Solve it.  Then write the solution as a Romance.

Do it well, find a good marketer for it, and you might found a new Genre.