The Reviews have not been indexed yet.

The success of the Romance Genre in penetrating Science Fiction and Fantasy genres is beautiful to see.

The Soul Mate issue, and all the aspects of Relationship that are fueled by or form the foundation of Love (True Love), are working their way into plot, story, and world building.

we discussed Empire of Silence by Christopher Ruocchio, and how the Galactic Civilization is depicted using a loose, sprawling style, making the book much thicker than it had to be.  It is a story about a guy, an aristocrat, who gets tossed into the lowest, grimiest level of his civilization, and climbs back up.  Along the way, he meets a girl he really loves - then she dies and he goes on.  But her memory is one of the driving forces that propels him to galactic significance again.

we looked at the conclusion of Simon R. Green's two long, intertwined Paranormal Romance series, where the Romance spans the two separate series and unites them.  Night Fall is the title of the combining novel, and it is very strongly driven by the slowly developed Romance.

Now in Reviews 43, let's look at another Fantasy Genre (maybe Urban Fantasy) novel, this one a marvelously good read, a page turner with great promise for a new long-running and complicated Series, The Late Great Wizard by Sara Hanover. 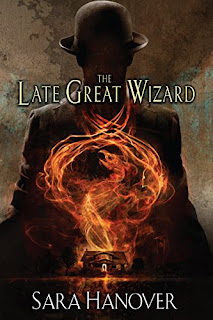 The Amazon page indicates a second author, but the pre-publication cover and title page on my ARC copy does not, so I will reference Sara Hanover as the hand behind this (wonderful) book.

Hanover demonstrates a writing technique worthy of close study.  She takes a beaten-to-death, modern Urban Fantasy premise -- (among normal people such as you deal with every day, there exist some people who practice magic and other paranormal talents who do everything to keep you ignorant of their existence and affairs (and wars)).

Hanover then mixes in another beaten-to-death modern plot element, The Phoenix, being not a bird or god, but a person, a human, who dies in fire and must use a magical ritual to return fully to life and functioning.

She shakes the mixture and pours out something new.

And as you read, you learn once again the oldest, truest maxim of story craft: Setting, Time, Place, Plot, and Action Do Not Matter.

Reader enjoyment arises from the Characters and their Relationships.

It is the story that matters - and you can write and sell to any genre by telling your story in whatever Setting, Period, or World that genre needs.

Yes, we have discussed, at tedious length, how the World must be integrated with Plot, Story, and Characters.

Characters are shaped by their environment, and morph into hero or victim or bully according to the experiences their World throws at them.

In Romance, we prefer the Character who gets whacked by a Problem, and Rises To The Occasion.

In Science Fiction, likewise, we want a Character who starts off as the last one you'd expect to be able to do something -- then Rises to the Occasion and conquers.

Likewise, in Paranormal Urban Fantasy Romance, we want to see the Character rise to the occasion and do what would have been impossible without confrontation with a challenge.

The element that raises Sara Hanover's new Phoenix novel far above most of the others I've seen lately is that the female lead Character, First Person Narrator, Tessa, is surrounded by deeply knit family.  The Father is currently missing (they find out what's happened to him), but though there were issues with his pre-disappearance behavior, the love is staunch, unflinching amidst the apparent betrayal he perpetrated.

Tessa's goal is to get her college education completed and find her father.

Tessa and her mother are just scraping by in a college town which could be anywhere in the USA, but is near Washington DC, which they visit (a place famous among the esoteric community for its ley lines).

This location is interesting because the author seems to live in New Zealand.

To help out with expenses, Tessa accepts a job delivering (by bicycle) meals to the Elderly.  One of those Elders is "The Professor" -- who turns out to be a Phoenix, and a Wizard being targeted by a warring faction among the supernatural community.  He incinerates himself to avoid a worse development, but reincarnates as a younger man. He staggers into Tessa's presence as he comes to in his back yard, house in cinders, memory gone.  From what we know at that point, "wayward mage" sounds like a reasonable sobriquet.

He is a wizard, but barely knows he has such power. To restore his memory, he must perform a ritual -- the required components are scattered and hidden by his former elderly self.  So Tessa must help with the treasure hunt, hazy lack of memory, and assortment of friends, enemies, frenemies from his paranormal community.

This elderly wizard who was a warm friend is now of her age-group and very handsome.  He knows and admires her for herself, and that basis of relationship matters -- but now there's more.

At the end of this first novel in what I hope will be a long series, Tessa has a much more accurate idea of how her world works, and what's actually going on.  She has the full support of her mother, and a solid notion of what's going on with her father.  She has an Aunt with an odd talent for luck, which Tessa seems to have inherited.  And she's made her mark in the paranormal world.

Now she has to go back to Classes.  How will she concentrate, knowing what she knows?

The very best part of this novel is the Relationship between Tessa and the Wizard, and how plausibly it shifts.  The next shift will come when the Wizard has his full powers back.

Sara Hanover has made two old, out-worn, tired story ingredients into something new.  That in itself makes this book worth reading.